I'm still chugging along on the third draft of The Distant, my next novel.  I'm on page 124 out of a current 323 (these are MS Word pages, single spaced).  So close to 40% complete after two months of editing.

Last month I discussed a bit of the work's history and how it had changed over each draft.  Revising the third draft has been challenging as I'm going through it with a fine-tooth comb, essentially doing a line edit and really paying attention to a lot of little things that I had never paid attention to before.

Because this was initially written many years ago and has gone through a few iterations, and because it's a bit longer than previous works, details about characters or places tend to easily get confused or overlooked.  Especially if you're the only one doing the editing (I have not decided yet whether to have someone else do an edit later).  What I've been doing here that I have not done before, is maintain a separate text file that notes all the things I have to remember.

This file helps now, but it will be even more helpful during the next draft, because then I'll have a comprehensive list of everything I need to pay attention to and make sure are consistent and accurate.  Examples include what characters look like, what injuries they have, their mannerisms, etc.

There are prose-specific things I need to pay attention to as well, like the fact that Clearmen (people from Orland's Clear, one of the cities in the novel) don't use contractions in speech, aside from possessive contractions (like it's, John's, etc).  I'm deliberately doing this to give their speech an "Old World" and measured quality.  Though it's debatable whether English-speaking people in previous centuries used contractions less in their speech compared to those of today - and there's an interesting post on StackExchange about it, that I recommend checking out - though it's debatable, that's not the point.  I'm merely trying to distinguish the speech of two different people and this serves the purpose well-enough.  But it's something I have to really pay attention to, as it affects the cadence of the prose.

Which brings me to the other half of this update.  I have some other text files on various topics that I find it useful to refer to at any time while writing.  But it's a pain to open everything and arrange them just so on the screen.  I have a widescreen monitor and use 1600x900 resolution, so I have plenty of room, but hate having to manually set everything up.

Then I thought, surely there's some application I can use to create macros for Windows tasks and automate this?  Not having a need for this before, I had no idea what was best to use.  In the end I settled on AutoHotkey, which is free and does pretty much everything - you just have to learn how to create the scripts that automate commands.  With robust documentation and a very active forum, and lots of examples all over the internet, it's easy to learn and troubleshoot.

This program is pretty awesome.  It took me a little bit of reading, but eventually I created a script that upon pressing a key combination, will immediately open and resize each of my ancillary text files, as well as my main third draft Word document, then place them in specific places on the desktop.  In the end it takes just a few seconds to run and here's what the layout looks like: 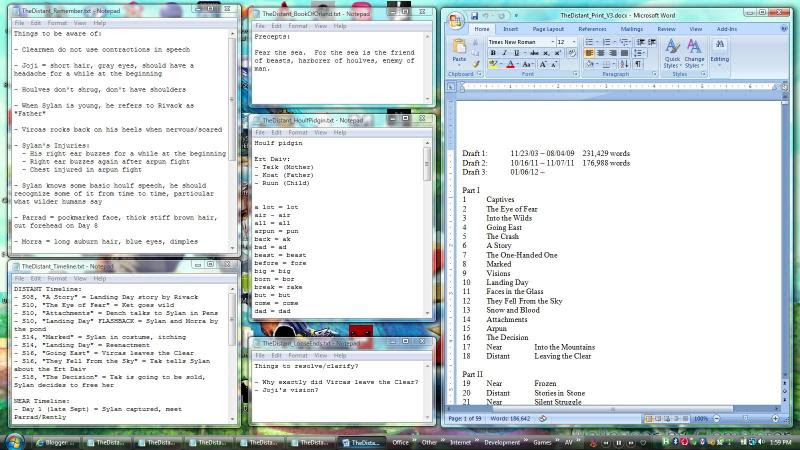 In addition to my main Word document, I have files for:

It's so much easier to start working on the novel with this setup.  And then when I'm done, I have a second key combination that immediately closes everything.

The nice thing about AutoHotkey is that though you can only have one script running, you can put multiple macros in that script.  So in my TheDistant script, as mentioned earlier, I have a macro for opening/placement of all files, and a macro for closing everything.

You can just place the script as a shortcut on your desktop.  When you're ready to use it, double-click it like anything else and it will start running in the background (an icon will show up in the notification area of your taskbar).  Then you can use the key combinations for your macros whenever.

At first I wasn't sure how to figure out the exact position and size of each window on the desktop so that I could use it in the script code.  Then I discovered a handy tool called Window Spy that comes with the AutoHotkey installation.  This tool tells you all the relevant stats for any active window. 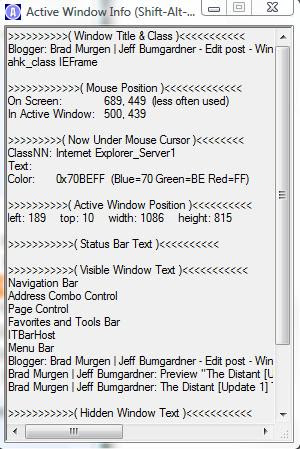 From this you can see in the Active Window Position all the info I need.  Plug those numbers into a WinMove command in AutoHotkey and blammo!  Everything in it's proper place.  For each file I used a Run, Sleep and WinMove command list.  Sleep is needed because if the file isn't actually open when it gets to WinMove, the WinMove has nothing to run on and is essentially skipped (it took me about 15 minutes of troubleshooting and forum searching to figure this out).  So don't forget the Sleep command! 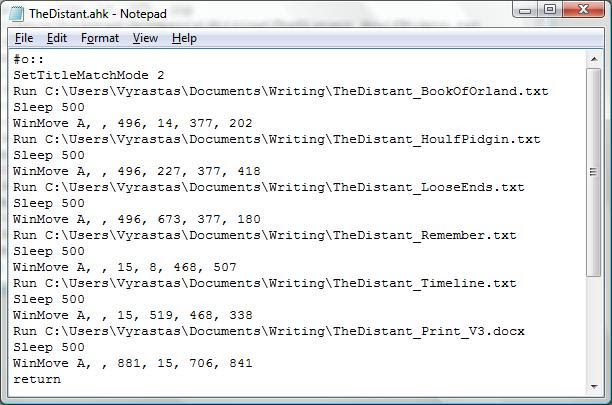 This is a great tool if you need to automate repetitive tasks on your computer.  The scripts can be daunting at first, but if you are familiar with any kind of programming language it will only take minutes to figure it out.   You can essentially do anything with this application that you can do with a mouse and keyboard.  I can already think of some other things I can use this for... why I never thought to look for something like this earlier is beyond me.
Posted by Brad Murgen at 2:04 PM