Now that I've made it through the main sequence, it's time to move on to the prequel, New Spring.  Or as the novel version is called, New Spring: The Novel.  I've never read the original novella that appeared in the Legends anthology. I read the novel version for the first time in 2005, for the re-read I did in anticipation of Book 11, Knife of Dreams. That time I read it as the first book. This time I'm reading it after the main sequence.

I'm somewhat ambivalent on this book. It's great to get some more detail on Lan and Moiraine's backstory, but on the whole it doesn't stand alone that well, it's not all that exciting, ends abruptly and can really only be appreciated after you've read at least half of the main sequence. This is a book that fans of the series will enjoy, but I would not recommend it to someone who hasn't started the series.

I honestly don't remember much from the first time I read this. I don't know if that's good or bad. It's quite short compared to Jordan's other works, and we already knew a few of the prominent plot points as they are referenced in the main sequence. What we didn't know was the exact circumstances by which Lan and Moiraine met and how she bonded him.

I blew through the book in a few days. I did remember that in the future, I shouldn't read this at the beginning, because it's not the way to ease in the tale of the Dragon Reborn, despite the fact that his birth occurs during this time.

I'm still on the fence about this book. It's typical Jordan, exhibiting the long-windedness he showed in Books 8-10, and I found the first half of the book rather dull. It doesn't pick up until Moiraine takes the test to become Aes Sedai. From then on it moves pretty quickly, and it's nice to explore a nation (Kandor) that is rarely visited in the main sequence.

Some of the stuff with Lan and Edeyn feels out of place, because she is never mentioned in the main sequence, though the whole business at the Aesdaishar Palace in retrospect seems important enough to have been mentioned. Especially as it pertains to the Black Ajah, as well as Lan and Nynaeve's storyline. But I'm guessing Jordan didn't have those details down until he did the novella version of New Spring.

What really stood out to me, though, were how so many prominent Aes Sedai in the main sequence are Accepted in this book, which only occurs 20 years before. It always felt like these characters had been Aes Sedai for a long time, but in reality they hadn't worn the shawl more than 20 years. Aside from Moiraine and Siuan, other Accepted who have somewhat important roles as Aes Sedai in the main sequence are Alanna, Carlinya, Edesina, Katerine, Myrelle and Sheriam. I guess it's just hard to think of any Aes Sedai aside from Egwene, Elayne and Nynaeve as young, because they are so rooted in the old traditions.

Lastly, I had to look up how Siuan became the Amyrlin, because in this book you had one dying (Tamra Ospenya) and another (Sierin Vayu) being raised... but then Siuan is Amyrlin when the main sequence starts, only 20 years later. Seems there was even another Amyrlin after Sierin, who also died just a few years later. Didn't even realize that. Apparently it's in the "Big White Book," which I'll discuss in the next blog post.

Sweet's cover is obviously an homage to the cover for The Eye of the World, with a younger Lan and Moiraine riding along, a few people plodding along behind them. It looks more like the classic Sweet covers from the 80's, rather than the others he did in the main sequence. 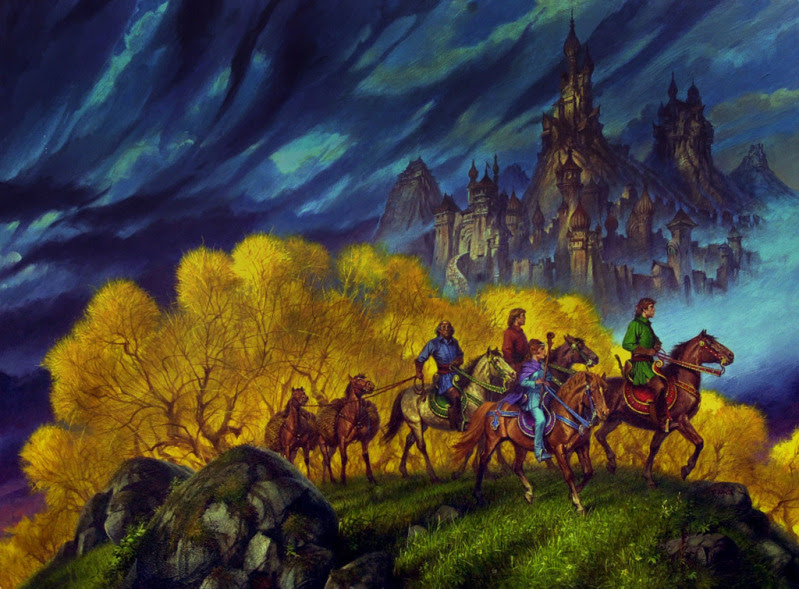 It's a typical Sweet cover. I do like the background in this one, the sky and the castle. I don't like the character depictions that much. I mean...is Moiraine wearing pants? I'll just stop right there.

The ebook cover by Jason Chan is a billion times better. It sums up the point of the novel in a single image: Moiraine bonding Lan as they start their search for the Dragon Reborn. 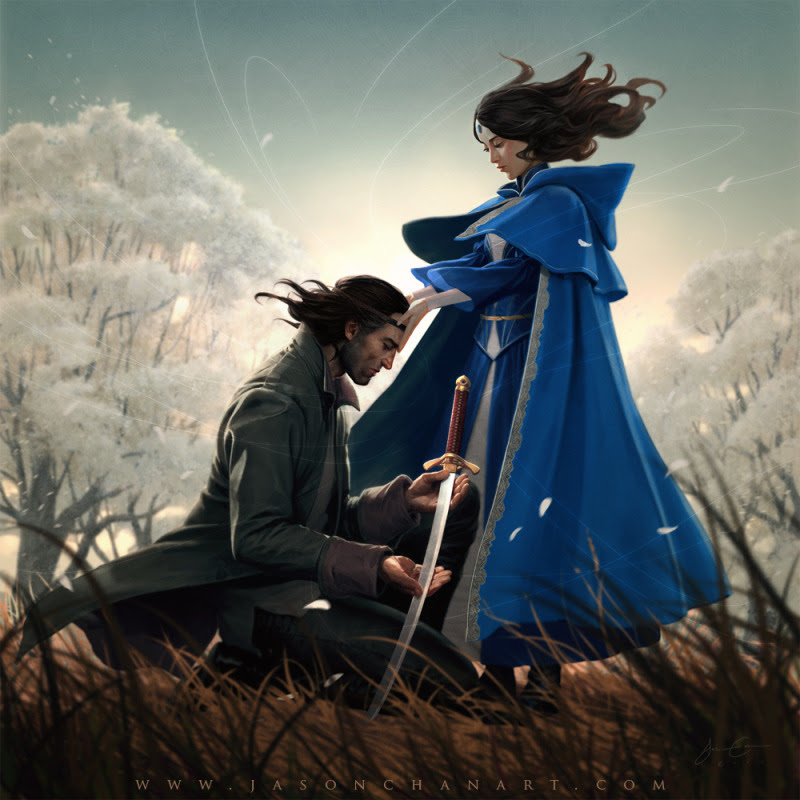 Red Eagle and the Comic Debacle

I heard about the New Spring comic adaptation like everyone else, through Dragonmount.com, when some publishing company called Red Eagle Entertainment announced they were trying to adapt WoT in other media like comics, movies and games. I figured it was only a matter of time, given the popularity of the series, so was not that surprised. I like a good graphic novel from time to time, and I liked the preview art that was coming out of the Dabel Brothers, so I pre-ordered the series (8 issues) and waited for them to arrive.

The first couple of issues were well done and I was generally pleased. But then, halfway through, things kind of died out. I believe I got up to issue #5 before they stopped. There is a lot of back and forth about this on the internet, but in the end, Red Eagle dropped the ball.


Red Eagle is pretty much an unknown, and when I did more research I was rather surprised Jordan signed a distribution deal with them. Since that deal in 2005 they've produced 5 issues of the New Spring comic. That's it. In the end, Jordan was very displeased with them, as mentioned in the very last blog he posted before his death.

I don't know what happened to their contracts; Jordan implied in his post that they would have all expired by now, but they've since posted a press release about a video game that involves EA Partners. Either way, I don't really trust anything that Red Eagle is trying to do, given their track record.

Dabel Brothers, the creators of the comic, eventually ceased production operations. We kept hearing that they would finish up New Spring and send the final issues to everyone that paid for the entire series (like me), but it never happened. Apparently much of the work was already done, but without getting paid, they couldn't release them. 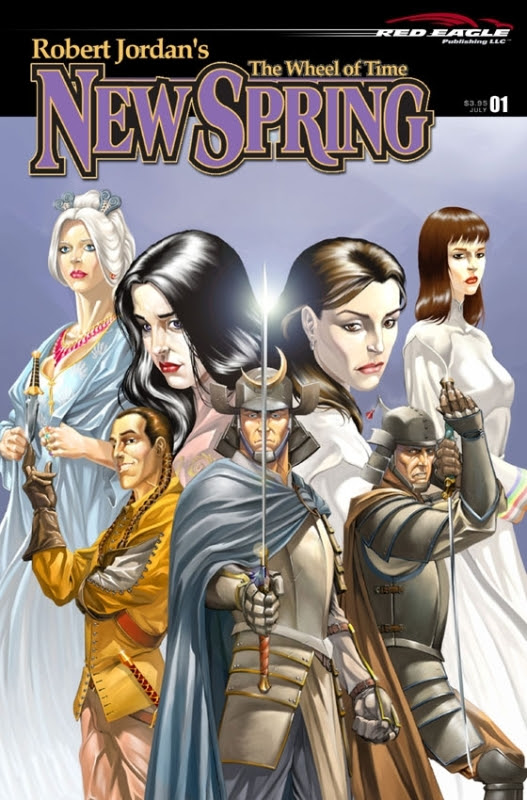 Some 3 years passed and they came up with more promises. At that point I'd had enough and emailed Dabel Brothers to ask for a refund for the issues I did not receive. Les Dabel himself responded with assurances about this and that, but I was tired of all the promises. I wanted my money back. They finally gave me a refund.

Eventually the series was finished. Dabel put out issues #6 and #7 themselves sometime in 2009, and Dynamite Entertainment (who bought Dabel's catalog) published the last in 2010. The artist changed in the last issue for the worse. All in all, it was a huge, disappointing mess that started strong and finished with a whimper 5 years later.

Dynamite Entertainment started production on a new series of comics based on the main sequence around 2009. After what happened with New Spring, I was not about to subscribe to it. I generally like to get graphic novel versions rather than individual issues anyway.

Still, months after I asked for and received my refund on New Spring, I got more comics in the mail. They sent me another New Spring issue, as well as issues #0 and #1 of the new The Eye of the World adaptation. That was nice, though I had not asked for them. I never read them; I just put them in a box. I'll keep them in a good condition and perhaps they'll be worth something someday. 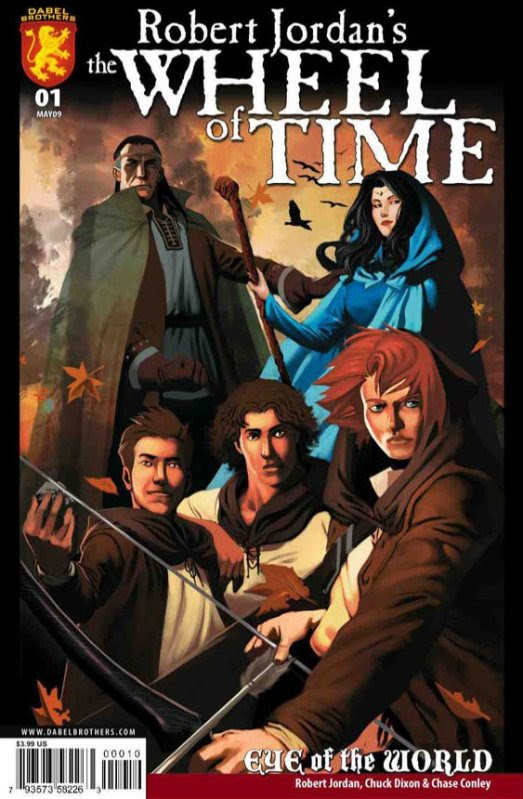 We've heard about possible film adaptations, as well. Red Eagle was working on a screenplay for The Eye of the World, and I believe the option has since passed to Universal. After seeing how well HBO has done with adapting George R.R. Martin's A Song of Ice and Fire, I personally do not wish to see a feature film version of The Wheel of Time. It will just be butchered. A TV series is the only way to go, but if they never adapt it, then that's just fine with me.

It's a shame that Jordan was not able to write any of the other prequels he had in mind for WoT. There were two others he had planned: one about how Tam al'Thor found Rand on Dragonmount and took him back to Emond's Field, and another about how Moiraine and Lan discovered where Rand was and arrived at the Two Rivers in the nick of time.

Like New Spring, these would have imparted additional details on the backstory, and I would have definitely read them. There are no plans to have a different author write these, though, and I have to agree with Harriet's (Jordan's widow) decision on that. It would have been great if Jordan could have written them, but it's not necessary to write them. You can still enjoy The Wheel of Time to its fullest without these books.

A Memory of Light Cover Art

While reading New Spring, two covers for A Memory of Light were released.

First was the "unfinished" Darrell K. Sweet one. I actually thought was halfway decent and kind of cool. You can definitely tell some parts are a bit unfinished, but I'm surprised they didn't use it anyway. It could have still worked. 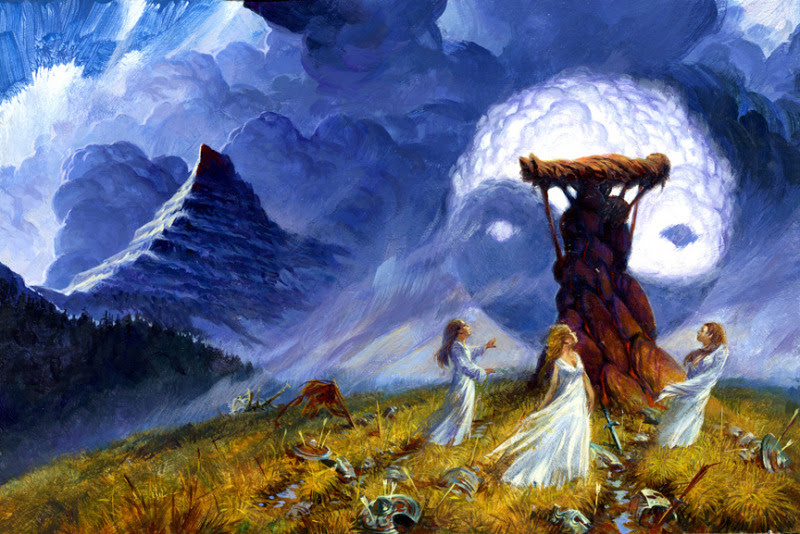 Later, Tor revealed the official cover art for A Memory of Light, by Michael Whelan, who was brought in after Sweet's death. 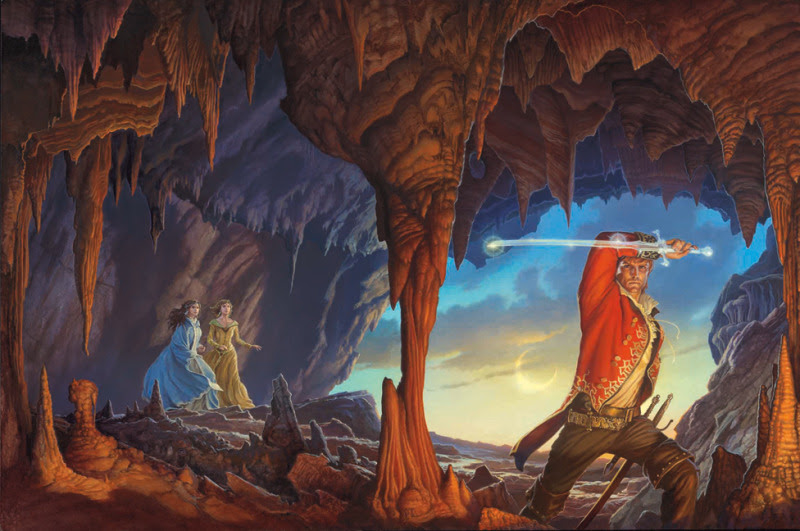 At first I was a bit disappointed with Whelan's cover. I can't tell you how strange it felt to want the Sweet cover instead, considering how much I bash him in these blogs. But the more I looked at the Whelan cover, the more I liked it. We get a proper illustration of Rand for once, and having him front and center—and alive—sums up the thrust of the entire series. Rand is on his way to fight the Dark One in Shayol Ghul. It's the moment we've all been waiting for these 20+ years.

I have no one specific to thank for New Spring, so I'll just thank Michael Whelan, for graciously picking up the reins on the final cover.