Earlier this month I started the first draft of the second book of the trilogy, Wilders.  I was tired of editing The Distant and wanted to get moving on the ideas for the next book while they were still fresh.  This is a good thing for me, because as I write I always come up with new stuff that I didn't think of while outlining, and I figure out ways to work it in (or just do it even if it doesn't quite fit and revise earlier material later on to make it fit).

Such is the case with Wilders.  I've got about 20K words so far, which is roughly 1K words a day (my target).  It's coming along great and there are a number of things in The Distant that I now need to revise given the content I've written so far, as well as some new material I'm going to insert to make later events more impactful.  Seems like a strange way of writing, but hopefully I can get the majority of the Wilders first draft done before I finalize The Distant.

I'm just not the kind of writer that can plan every detail out before writing a single word, so I don't foresee an epic series in my future.  I can't imagine how some of those guys like Robert Jordan or George R.R. Martin do it... epic, multi-book series are a lot of work.  So give GRRM a break on how slow he's been with his books lately.

I read through The Distant before doing any work on the fourth draft.  There were a few places where I got bored and realized some trimming was needed.  I've done a little more rearranging and condensing of chapters to alleviate that, cutting the boring parts and focusing only on content that is important.  I'm currently reading the Chung Kuo series by David Wingrove (the original version, which is awesome, by the way) and I love the pace of the books, the way he just focuses on important plot points and never gets too long-winded with the exposition.  So it's inspired me to streamline my writing and never let the reader get bored.

Because of that, I've cut another 10K words, and am down to 176K.  Hopefully I can finish under 170K.  The book is split into two parts, so it's essentially two 80K-90K books, which feels about the right size to me.  I'm switching back and forth between the fourth draft of The Distant and writing Wilders, which helps because then I don't get too bored doing the same thing all the time.  As long as I work on something each day, I feel like I'm progressing.

The Trilogy - The Hope of Memory

I think I mentioned before that I had a working trilogy title of Of Houlves and Humans.  I never liked this title and have been racking my brain for a new one.  Finally one came to me during a walk, after I had started Wilders.  It's going to be called The Hope of Memory.  This is the final title.

Also, have been working on possible cover art... here is something that will be part of the cover for The Distant.  What is it?  Well, you'll just have to read and find out when the book is released. 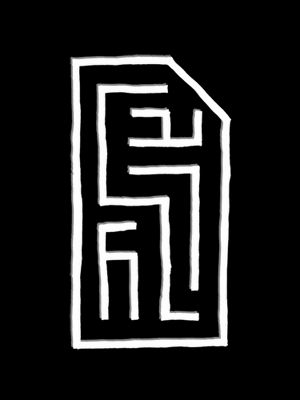 Posted by Brad Murgen at 9:18 PM No comments:

Email ThisBlogThis!Share to TwitterShare to FacebookShare to Pinterest
Labels: brad murgen, science fiction, the distant, the hope of memory, wilders

The Belgariad / The Malloreon - The Retrospective

As I mentioned in the overview for my Wheel of Time Retrospective, the very first fantasy series I ever read was The Belgariad (1982-1984), a five book series by David Eddings.  I was in seventh grade when I started this series, and it quickly became my favorite.  My older brother originally bought most of them, but he stopped reading them and I essentially took his copies for my own.  I read it over and over again, was consumed by it and sometimes wished that I was Garion and lived in such an interesting world.  It's a simple coming-of-age story, one that easily appeals to young adolescent boys.

At the time I started reading them (roughly 1989), Eddings was in the middle of the sequel series, called The Malloreon (1987-1991).  Another five book series, this one picks up where the first left off and explores the rest of the main continent and the continent on the other side of the world.  In the end, the reader is left with a much different world than when the series started, many important revelations, and to be honest, I preferred The Malloreon over The Belgariad when all was said and done, for a variety of reasons that I'll get into in each book post.  I caught up to his current progress in The Malloreon at that time, and eagerly waited for the last two books in the series to come out in paperback in the early 90's.

Eddings wrote three more novels in the same world, two being memoirs of the lives of very long-lived characters (Belgarath and Polgara, who have lived 7,000 and 5,000 years, respectively), the other being a collection of reference and background material for the series (which I actually have yet to read).  All three of those will be covered in this retrospective.

Originally all books were credited to David Eddings.  Later in his career, his books were all credited with his wife, Leigh Eddings, as a co-author.  He said later that she contributed to all of his books.  The ones they wrote later in their careers (anything after The Tamuli series) are junk, in my opinion.  I don't know if one or the other was writing more for these, if they had gone senile or what.  But they're horrible, written poorly and rehash the same characters and ideas from their earlier, better series.  It was a huge disappointment for me to see their writing decline so much, considering how much I liked their earlier material.

Both of the Eddingses are dead now.  Leigh died in 2007 from a series of strokes, David in 2009 of natural causes.  Their deaths went somewhat unnoticed, only a few postings on the internet about it, and I was sad they didn't get more attention.  In 2007, in a bit of unsettling news, it was reported that David accidentally burned down his home office while flushing gasoline out of his car, destroying many of the original manuscripts for his novels.  The rest of his materials went to Reed College in Oregon, his alma mater (the same college that Steve Jobs famously attended briefly), upon his death.

Anyway, The Belgariad and The Malloreon aren't exactly the "deepest" fantasy and they are a bit derivative, but they were one of the early fantasy series that helped to take the genre mainstream (along with series like The Chronicles of Thomas Covenant the Unbeliever by Stephen R. Donaldson, Xanth by Piers Anthony and Shannara by Terry Books – all on Del Rey, which spear-headed the charge) and are just plain fun and entertaining to read.

Honestly, though, it's more for teenagers than adults, though many adults will enjoy them.  Almost down to YA book levels (before there was an actual YA category in bookstores).  I highly recommend them for anyone in elementary or middle school.

I've re-read these books many times over the years, but haven't read them since 2003.  I did listen to the audio versions of the first two books, Pawn of Prophecy and Queen of Sorcery, last year when I was moving cross-country, but I found it took away from my enjoyment of the series because I didn't like the reader, so I stopped with the audio versions.

These books are much shorter than something like The Wheel of Time, so I should be able to knock them out fairly quick.  Sadly, they aren't on Kindle yet, so I've had to dig out my physical copies of the books.  The posts won't have much in the way of pictures, since there are virtually no fansites or art on the internet for these series, as they were completed before the internet as we know it today existed and have waned in popularity since.

As always, there will be spoilers for the entire series in each blog post, so if you don't want the series spoiled, you should hold off reading these until you've read the entire series.  If you don't care or have already read it, then dive on in.  Check the links below or the Fiction Retrospectives link at the top of every page.

Other Novels
Belgarath the Sorcerer
Polgara the Sorceress
The Rivan Codex
Posted by Brad Murgen at 9:17 PM No comments: