This was the first "true" fantasy book that I read.  I suppose I was bored - I don't remember the exact reason why I started reading it - I just remember taking the book from my older brother's room when I was in 8th grade, living on Minot AFB, North Dakota.  Maybe that's enough to tell you why I started reading.  There's not much to do on Minot AFB.

It was 1990, I believe.  All I remember from then was that the series fascinated me, and I quickly went through all the other volumes that my older brother had, which was up to Demon Lord of Karanda, Book 3 of the sequel series, The Malloreon.  Eddings was still writing that series, so I had to wait for two more.

Back then, I obviously thought it the greatest thing since the Nintendo Cereal System.  I hadn't read any other fantasy, so didn't know what was good and what wasn't.  As such, it probably influenced me more than any other work, maybe more than The Wheel of Time.  I read it many times through middle and high school, when I was building my own world view and opinion of fantasy and science fiction.

I later got into authors like Piers Anthony, Stephen R. Donaldson, Margaret Weis and Tracy Hickman, and read many of the genre classics through high school and college.  But Eddings and The Belgariad will always hold a special place in my heart.  It was my first.

I can now easily see how such a story influenced my view of fantasy and my own writing.  It's the typical "unknown-boy-becomes-king/wizard/etc" type of story that became prevalent in fantasy as it entered the mainstream in the 70's and 80's, and which is now so cliche that few writers use it today.

In this story, Garion grows up on a farm with his Aunt Pol, ignorant of the ways of the world, not knowing who his parents are.  An old storyteller called Mister Wolf visits from time to time, bringing tales of the world.  Then one day something important happens in the world, and Garion is whisked away from the farm by Aunt Pol and Mister Wolf, who he soon learns are daughter and father - 5,000 and 7,000 year old sorcerers, respectively.

The covers for The Belgariad were done by Laurence Schwinger. I couldn't find much info on him and he doesn't seem to have a website. Aside from The Belgariad, he did a lot of covers for Andre Norton and some for Piers Anthony (The Apprentice Adept series, which I plan to do a retrospective on).  The covers generally depict an important scene from the books, with a map of the area of the world they are in in the background.  I've always liked these covers. 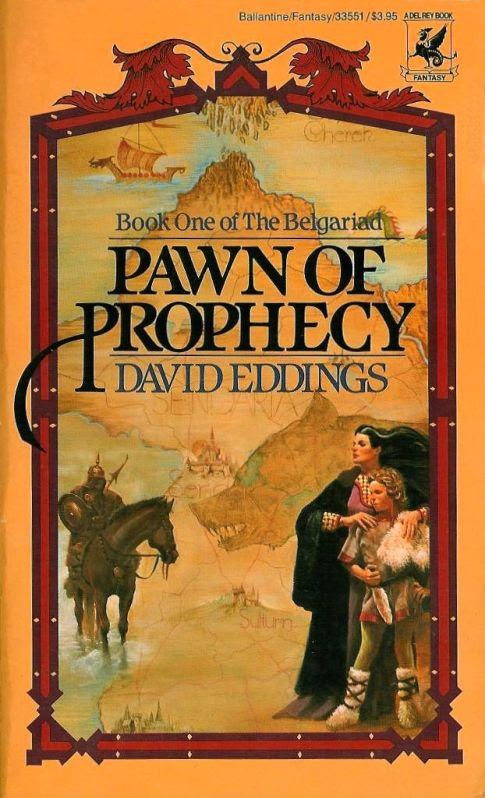 For Pawn of Prophecy, we have Aunt Pol (Polgara) and Garion, with the dark figure on the horse watching (see the next section).  You have a wolf silhouette in the background (Mister Wolf / Belgarath) and the map of Sendaria front and center.

What I like about this cover is that the artist paid attention to details, unlike some other cover artists (*cough* Darrell K. Sweet *cough*).  The detail in the clothes shows that Schwinger actually read the relevant passages before painting.  And the Cherek warship (that looks very Viking-like) in the upper left is a nice touch.

Eddings doesn't bother to keep Garion's heritage a secret from the reader.  Garion may not know, but it's perfectly obvious from the very beginning that Garion is very important.  By the first third of the book, when you learn about the birthmark on his hand, you know exactly who he is (the descendant of the Rivan King, a line thought to have died thousands of years before).  Curiosity about the events to come keep you hooked, because you want to see if Garion will reclaim the Rivan throne.

Related to this, something that always bothered me was the "dark watcher," a la the Ringwraiths from The Lord of the Rings. One of the Grolim priests appears to Garion as a child, and watches him from afar, a dark figure on a horse. We later learn this is Asharak, who killed Garion's parents, and has been watching him since. I never understood why he didn't just kill Garion when he was younger - he was trying to when he killed his parents (set their house on fire), so what was stopping him in later years? I think there was some prophecy involved, I can't remember - I suppose I'll find out as I re-read, but it may just be a plot hole.

There are a lot of fantasy cliches in this series, which at the time did not seem so cliche, but do now.  The biggest is the concept of prophecy, and the guiding force that it has on characters in the story: characters (like Belgarath) take action based on what they know of the prophecy, but in the end it all works as intended, regardless of what they try to do.  Reminds me of a Twilight Zone episode (No Time Like the Past), where a character travels into the past and eventually tries to change an event, only to find out that in doing so, he is the one who causes it in the first place.

Prophecy has been used in so many fantasy books that I personally roll my eyes when I come across it now.  The Wheel of Time is the last work where I can take prophecy seriously.  In my own writing I purposefully avoid it, because it's just overdone.

In this series, prophecy is a huge factor.  Back then it was fun to see it fulfilled over the course of the entire series, because lines of prophecy that seem to make no sense become clear five books later.  And if you've read the series already, it's fun to pick out the little clues the author throws in there that shows they were planning ahead.  A good example is in this book, where Garion mentions a seer had visited Faldor's Farm once and said Durnik would die twice.  This is something from prophecy that's not mentioned as being Important until Book 3, Magician's Gambit, I believe.

Something I always thought was clever in this series was how the author structured the narrative so that we visit every nation in the West over the course of the series.  Throw in The Malloreon and you as the reader make it to every nation in the entire world (they spend half of that series on the other side of the world, on a different continent).  Each part of the story is rooted in one nation, with a map at the beginning of the section.  It was fun to get the next book in the series and quickly check the maps to see where you were going next.


The Wheel of Time started out in a similar fashion, but it digressed and much of that world remains unvisited by the time you get to the end.  In The Belgariad and The Malloreon, you get a taste of every single nation, which helps the reader really understand how it all fits together.

With that, I'll talk briefly about each nation as we hit them during the series.  In this first book, we visit Sendaria and Cherek.  As a sidenote, I've always found the maps that Shelly Shapiro did for various books throughout the 80's and 90's to be some of the best for fantasy and are iconic for me.  Although I do think the ones in The Malazan Book of the Fallen by Neil Gower are pretty awesome, too.

This is the nation where our story starts.  Garion was born and grew up here.  It's a nation without a God.  In the mythos of the story, seven Gods chose seven People, but over time and after many wars this group of people splintered and formed their own nation, and are separate from the original seven races of People.  It's almost like the United States, I suppose - a melting pot.  Sendars are practical and don't believe in magic much.  Probably the most boring and uneventful place a future King could be raised in.


We hit a few cities in Sendaria, eventually visiting King Fulrach in the capital.  As I mentioned, Sendaria is pretty boring and makes for a good starting point to the story; there's not a lot to overwhelm the reader in terms of history.  It's all gradually introduced through Garion's new companions and each new nation he visits later.

Our party is summoned to Cherek in the second half of the book to meet with the Kings of Aloria (Aloria is comprised of the nations of Riva, Cherek, Drasnia and Algaria - the protectors of the Orb of Aldur, which has been stolen; recovering it is the purpose of the quest).  Cherek is a cold and forbidding place, with lots of mountains.  It's reminiscent of places like Finland or Norway, and the Chereks are like the Vikings of old - large, burly people who braid their hair and wear long beards, etc.


The party pretty much stays in Val Alorn, the capital.  There's not much else to explore, anyway.  But we got to visit it, which is the point.  There's very little opportunity to visit Cherek for anything important later in the series... you can just sail around it to get to Drasnia or Algaria.

I mentioned this briefly in the overview, but wanted to mention it again here.  When I was moving across the country last year, I listened to the audiobook version of this and the next book in the series, Queen of Sorcery.  I had never listened to an audiobook before, you could get free credit for signing up to audible.com and since I needed something to help with the 2,800 mile drive, I downloaded the first two.

I didn't like them.  The reader (Cameron Beierle) was decent enough, but it messed with my own perception of the story.  Some of the accents he used conflicted with how I'd always thought the characters spoke, and some of the pronunciations were different.  I've read this series so many times that it actually hurt the story for me.

So... I'm sticking with reading on my own.