I had all the books in this series on hand when I first started it back in 1990.  So unlike some other long-running series of late, I didn't have to wait at all.  I was thoroughly hooked on the series after reading only the first entry, so I immediately grabbed the next from my brother's bookshelf and continued the tale. I knew that Important Things were going to happen to Garion and I was anxious to see how it came to pass, as well as learn more about the world that Eddings had created.

In the previous blog for Pawn of Prophecy, as well the retrospective for The Wheel of Time, I generally break things down into "Thoughts Then" and "Thoughts Now."  To be honest, I don't remember my thoughts for each book in this series when I first read it, because I devoured them in a matter of weeks.  So I think I'll dispense with that format until maybe later, when I get towards the end of The Malloreon (I had to wait for the last two, remember).

Anyway, over time this volume has probably become my least favorite of the series, mainly because it's not as exciting to me as the others.  It starts around a month or two after Pawn of Prophecy, but it always seems to me like Garion ages a year or two between books.  He was a child before, but now he's suddenly a teenager.  Or maybe I just didn't age him enough in my mind throughout the first book.

In this volume we journey to three new nations: Arendia, Tolnedra and Nyissa.  Each of these nations are comprised of people bound to one of the original Seven Gods.  Chaldan (Arendia), Nedra (Tolnedra) and Issa (Nyissa).  These three always felt like minor Gods to me, because they rarely appear in the series... Torak and Aldur are the prominent Gods in the story, for obvious reasons.

First, the cover.  This one shows a scene from the very end of the book, when they are in Nyissa: Garion being brought to Eternal Salmissra, Queen of Nyissa, after he is kidnapped.  The snake there is named Maas (he can talk).  And of course there's Aunt Pol, or Polgara the Sorceress, who eventually gives Salmissra what she truly wants: eternal life.  With a catch, of course. 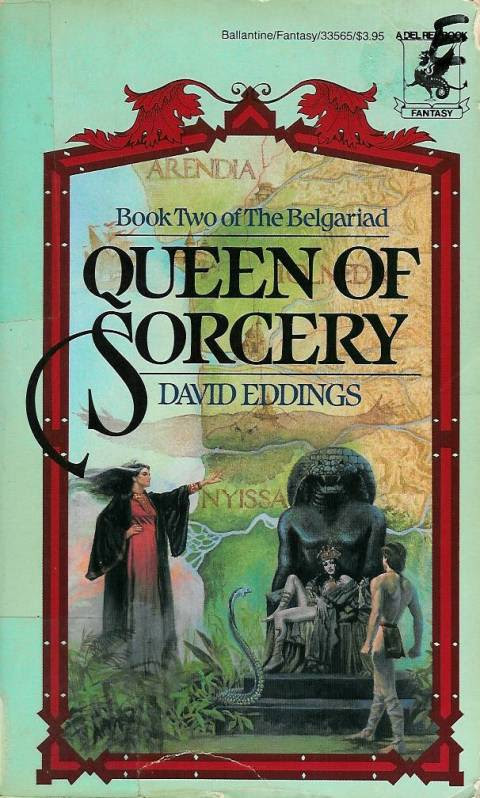 The background map shows the three nations I mentioned earlier, Arendia, Tolnedra and Nyissa.  And there's a silhouette as well, a pattern than continues for the entire series.  This time it's an owl, which represents Polgara. It's a good cover, although the statue of Issa behind Salmissra is supposed to be massive... but I understand why it's not in this picture.

Speaking of covers, this one is falling off on my copy.  Only the glue on the very top is still good and the binding itself has split halfway through the book.  All the other volumes in the series are holding up nicely, though.

So now everyone knows for sure what the quest is, even Garion.  The party can now speak of it without fearing that the Apostate, Zedar, will hear them speaking his name.  Zedar has stolen the Orb of Aldur from the throne room in Riva, and is supposedly taking it back to his master, Torak, who had used it to crack the world thousands of years ago.  Belgarath the Sorcerer, leader of our party, stole it back and Riva Iron-Grip took it into safekeeping for the West.

The Rivan King and his family were murdered hundreds of years ago by Nyissans, and everyone thinks the line is dead.  Of course we know that's not true - Garion is the current descendant of the Rivan line, his ancestor having escaped that slaughter and his family guarded by Belgarath and Polgara over the generations.  So the quest makes for a perfect set up: the Orb stolen somehow and the Rivan heir, the only human that can touch the Orb and live (or so we think), ready to take up his destiny.  Eventually.

In this novel we are introduced to some new characters, who join the Quest, forming quite the eclectic and stereotypical fantasy party, i.e. one of each race / nationality / profession.
Lelldorin gets injured about halfway through the book and is left behind, but the others are there to stay for a while.  Ce'Nedra adds a nice dymanic to the teenage Garion, who with his Sendarian upbringing is old-fashioned and awkward, whereas Ce'Nedra is forward, impertinent and often a tease.  When you learn that every Tolnedran princess must present herself at the throne room in Riva on her sixteenth birthday (part of a treaty), then things start getting interesting, because you know what that means.  Garion and Ce'Nedra, bow chikka wow wow.

Now, as you visit the new nations in Queen of Sorcery (and throughout the rest of the series), you'll probably notice the anachronisms between the cultures of each nation. Eddings kind of threw together cultures from different time periods in human history onto the same continent at the same time, which doesn't make much sense, to be honest.

There's the medieval nation of Arendia complete with knights and serfs. A Roman-style "Empire" in Tolnedra (which is small for an Empire) with dynasties of Emperors.  Then a jungle nation, Nyissa, that worships snakes, a cross between Egypt and Vietnam / Laos.  Add to that the northern nation of Cherek from Pawn of Prophecy, and what are essentially Vikings.  Looking ahead to future books, there's a nation of nomads that travel the plains like Mongols, called Algaria. Desert cultures in Cthol Murgos that remind one of northern Africa.  Etc etc.

It makes for great storytelling, moving from culture to culture, but realistically all those different cultures wouldn't develop and co-exist at the same time, in the same area (a relatively small portion of the western continent, about the size of Europe).  Granted, some could exist at the same time - maybe halfway across the world from each other.  It's one of those flaws in the world that you can forgive because the story is entertaining.

You might also notice there seems to be no progress among these cultures for thousands of years... which doesn't make much sense either.  Until later, when you learn more about the prophecy and what it really represents.  That's a number of books away, though.

Queen of Sorcery starts with our heroes in Arendia, a country just south of Sendaria (where it all began).  They sailed down there after the end of the last book.  Arendia is the medieval nation that's split into two groups: Asturian and Mimbrate.  Asturians live in the forest and are archers and the like.  Mimbrates live on the plains and are knights.  There used to be a third, Wacite, but these people were destroyed by the Mimbrates many years ago (Polgara talks about this in her memoir book, Polgara the Sorceress).


The party travels straight down the Great West Road on the eastern side of the country, bypassing the bulk of the country.  You get a good look at both sides of the country, Asturian and Mimbrate, and Garion even helps to foil a plot to assassinate the King.  You also get a lot of "thees" and "thous" since the Mimbrates speak in flowery, poetic English.  It's amusing at times, especially the banter between Mandorallen (our token knight) and Barak (our token warrior).

Next, we make our way down to Tolnedra, south of Arendia. Our stay in Tolnedra is relatively short. Belgarath wants to warn the Emperor, Ran Borune, of the theft of the Orb and the possible mobilization of the West against the Angaraks (Torak's people, the "bad guys"; they inhabit all of the east and south of the continent). The Emperor's daughter, Princess Ce'Nedra runs away because she doesn't want to be taken to Riva on her sixteenth birthday, and of course she joins our party - where it is virtually assured that she will appear in Riva, now that she's in Polgara's hands.


Then we travel through the Wood of the Dryads on the southern border, home to the Dryads.  There are mythical and wonderful creatures here and there in Eddings's world, but they don't factor into the storyline much... vestiges of an old world that are slowly fading away.

Nyissa is where we end the book.  It's a forboding land, most of it swamp or jungle, and the party is forced to go there because trail of Zedar (and the stolen Orb) lead there.  The party splits, Belgarath and Silk heading into the wilds on the trail, the rest sailing up the River of the Serpent to the only major city in Nyissa, Sthiss Tor.


This country is interesting... many people talk with lisps, they worship serpents, completely shave themselves and wear little (because it's so hot and humid), have slaves, and are experts in poisons.  We stay in Sthiss Tor for the rest of the book.  Garion is kidnapped by Queen Salmissra and rescued, then Belgarath and Silk rejoin the main party.

If you've been keeping track, that makes Garion five for five when it comes to rulers.  He's now met the ruler for all five countries he's been in.  Will he get a clean sweep?  Stay tuned to find out!

Belgarion and the Voice

The last thing I'll touch on is Garion's nascent powers of sorcery.  It is revealed in this volume that he can use the Will and the Word, which is the power that Belgarath, Polgara and all the other sorcerers use.  It's a surprisingly simple magic system for a fantasy.  He begins to use it in this volume and there's no turning back.  The first time he uses it willingly is to kill Asharak / Chamdar, who is revealed to be the person that killed his parents.  Garion burns him alive.

The other sorcerers now call Garion "Belgarion," which is his true sorcerer name.  Garion, being young, wants nothing to do with it and spends a lot of time sulking and feeling sorry for himself.  We are also introduced to a dry voice in Garion's head that gives him advice and helps when he's in trouble - the Voice is very important when Garion is kidnapped by Salmissra, for he was poisoned and the Voice tells him how to counteract the poison using the Will and the Word.

Later we learn that this is the Voice of Prophecy, who will remain with us for the rest of our story (both series).  A lot more to come on the various prophecies as Garion learns more about them.