After a three year break, David Eddings returned with a sequel to The Belgariad, another five volume series entitled The Malloreon.  It picks up a number of years after the death of Torak, and follows our heroes as prophecy forces them on another quest, this time to the continent of Mallorea on the other side of the world.  In my opinion, this series is much better than The Belgariad for a few reasons.

The books are a bit more expansive (Eddings said in a forward to the omnibus that size restrictions were relaxed this time around) and the lands we explore are a lot more interesting (and realistic) than the disparate Angarak and Western kingdoms.  Garion is an adult and the problems he faces are more interesting to me as a reader and less cliche (i.e. this series is not about some orphan finding out he's a king / sorcerer).  Also, the quest here is more compelling than what happened in The Belgariad, which had two separate quests, really (recovering the Orb and fighting Torak).

The map / kingdom section will be missing this blog post, as there are no new maps or lands explored in this volume.  But they will resume for the next, King of the Murgos, when our heroes venture down into previously uncharted portions of Cthol Murgos.

I don't have a lot to say about this book, other than a handful of gripes.

The first section of this book is very similar to the beginning of Pawn of Prophecy, the first volume of The Belgariad.  You will notice more similarities as you go through this series... one, because Eddings is somewhat formulaic and his quest-centric series all feature the same general pattern and types of characters; two, because in this world the meetings between Dark and Light repeat over and over, so we should expect some similarities each time.  How convenient.

Instead of Garion, we start with Errand and follow him during his childhood with Polgara and Durnik in the Vale of Aldur.  Errand is a special child and the way Eddings begins this series, it should be perfectly obvious that Errand is destined for something special.  Almost as special as what Garion did in slaying the god Torak.  Instead of slaying a god, though, we'll make a new one (the god that should have been in the first place) to fix the "cosmic error" that happen millions of years ago.

At least we don't have the same exact party of characters as we did last time.  Cyradis, the Seeress of Kell, who appears at the end of the book to instruct Garion on what he needs to do, tells some familiar characters to butt out of the quest.  Namely Barak, Hettar, Mandorallen and Lelldorin.  Though I don't mind these characters (except Lelldorin, who is useless, as I've stated before), I'm totally cool with this decision, because otherwise the series would be too similar to The Belgariad.

So you'll notice similarities here and there in the storyline as you go through the series, but I'm not complaining - this is what Eddings does best...

The Quest is Best

It should be obvious after reading this book that Eddings excels when the storyline is focused on a quest.  Figuring out the riddles of prophecy, the mystery of new lands, meeting new people... these are the things he writes well.  This entire book is consumed with non-quest activities.  It's all set up for the rest of the series, and some of it is necessary, but as a whole it's rather dull.  It's the same problem that plagued the end of The Belgariad, where half of Enchanter's End Game focused on the battle at Thull Mardu, which wasn't half as exciting as what Garion was doing.

So while I like this series better overall, it doesn't really start out that well.  It doesn't get interesting until about halfway through, when Geran is kidnapped by Zandramas, but even then it bogs down again with side trips to Jarviksholm and Rheon to deal with the resurgent Bear Cult (a massive red herring).  It's only in the last few chapters, when we learn what Garion & Co. are really supposed to be doing, that it gets interesting... and then it ends.

If I had been reading the series when this book came out, I probably would have been upset with it.  Much like I got upset during books 8-10 in The Wheel of Time, when the narrative slowed way down.  Thankfully Eddings was almost done with The Malloreon when I got involved.

The covers for this series are similar to the ones from The Belgariad, showing maps and silhouettes behind some characters, but this time they were done by Edwin Herder.  There's a bit more on him floating around the internet (compared to Laurence Schwinger, who did the Belgariad covers), and you can learn more about him here and here.  Suffice to say, he's done a lot of work for book covers, magazines, movie posters and advertising. 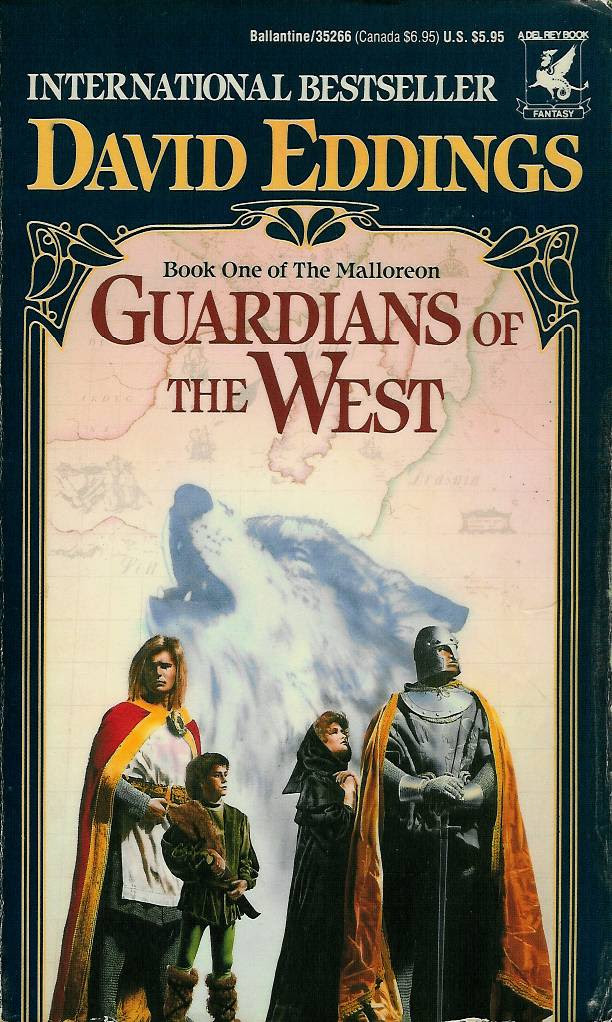 For this book, we have characters standing and looking at something above them.  I've never been quite sure who the character on the left is (I always think Lelldorin, but I doubt that's him), but the others are Errand, Ce'Nedra and perhaps Garion or Mandorallen (shrug)?  What they are looking at, who knows.  A map of Aloria in the background and silhouette of a wolf round out the cover.  A rather boring cover, if you ask me, but I do like the character art style, it has a photo-realistic quality to it that Schwinger's didn't have.

One thing I noticed in this book more than in The Belgariad, was how so many characters state the obvious.  Particularly when they are discussing some battle strategy.  Garion starts pacing and "thinking furiously" and offers up a suggestion that is obvious to even the dumbest person, and all the other Alorn kings are like, "very good."  It's laughable considering the battle plans they come up with.

Of course, none of the battles are all that interesting anyway, since they have sorcerers to do things like destroy gates or saturate the ground beneath walls to undermine their foundations... they all become one-sided and none of our heroes ever get hurt.  Although this time we are guaranteed a true death, as Cyradis mentions at the end of the book.  No Durnik with Two Lives - one of our heroes will die for real before all is said and done.  The one who dies is not obvious at first... when I first read the series I never guessed who it would be.

The Birds and the Bees

I know this series is generally geared toward young adults and casual readers, but the way Eddings treats sex and childbirth here is both amusing and ridiculous, even for that demographic.  Of course, most fantasy back in the day was pretty tame, with little sex or violence.  Stephen R. Donaldson was the most R-rated I found in the early days, but that was nothing compared to the fantasy of today, like Martin's A Song of Ice and Fire.

First we have the "sex scene."  Eight years pass and there is no heir to the Rivan Throne.  Brand suggests that Ce'Nedra is barren and Garion vehemently denies it.  Then why isn't there an heir?  Garion is puzzled... as if he doesn't know what sex is... as if they haven't been having sex AT ALL.  IN OVER 8 YEARS OF MARRIAGE.  And we, as readers, are supposed to believe this?  That Garion didn't even know what to do?

It really is laughable and completely unrealistic, but I get it.  However, it gets worse, when Ce'Nedra gives birth to Geran.  Garion suddenly regresses into a Neanderthal and can only speak monosyllabic words.  He becomes so vapid that he even attempts to smash a chair to create more wood for the fire.  I don't like the way Eddings wrote this section... it makes Garion seem so childish when we've started to accept him as an adult.

Side note: I've never liked the name Geran for the child.  That seems to be another fantasy cliche... name your child after the parent you never knew...

Why Can't You Just…?

Yet another thing that bothers me in this book is the way sorcery is shrugged off as a solution, outside of battle.  At one point, on the way to Rheon to destroy Ulfgar and the Bear Cult, Ce'Nedra gets impatient and asks Garion to use sorcery to help find their baby, and he says there are limits.  She bitterly responds, "What good is it, then?"

I have to ask the same thing.  Why don't the sorcerers just fly off on their own, search for Zandramas and get Geran back without having to travel across two continents?  It seems silly to stubbornly stick to prophecy when you have the means to fix the problem much quicker.  They have all this power, but hardly use it.

It reminds me of that age-old question regarding The Lord of the Rings... why didn't the Eagles just fly Frodo and the Ring to Mt. Doom?  As you can see in the link it's been analyzed quite thoroughly over the years.  But really, it boils down to two things: it's a simple plot-hole and the story wouldn't be as interesting. 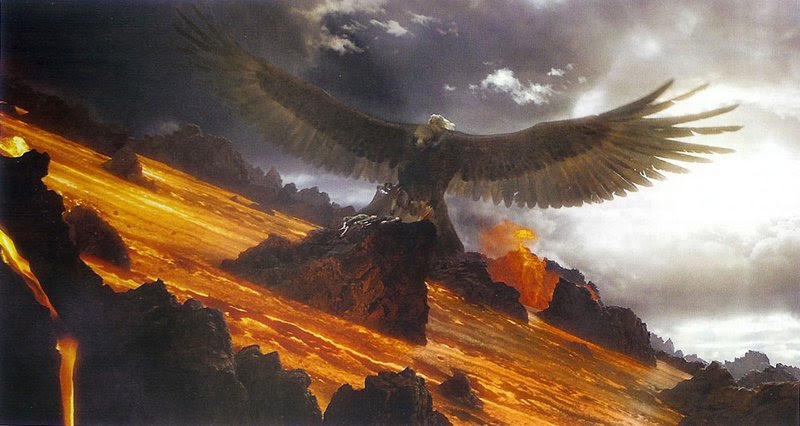 So in the case of The Malloreon, they have to stay within the confines of prophecy, otherwise we don't have much of a story.  Seems a bit silly when you really think about it, but that's what happens in fantasy sometimes.  It's still entertaining, though - enough to suspend your disbelief.

And speaking of the plot holes, I've always wondered why Zandramas chose to travel east with Geran after she stole him, rather than just sailing west from Riva and quickly arriving at the Mallorean continent from the other direction.  I guess that wouldn't be an interesting story either...