The release of A Memory of Light, the 14th and final volume in Robert Jordan's The Wheel of Time series, is fast approaching (less than 3 weeks!), so I figured it was time I do the long-delayed post on The Big White Book, also known by the cumbersome title of The World of Robert Jordan's The Wheel of Time, which I've never liked.  It's also annoying to use in the blog title / header, because of its length.  So it's titled "The Big White Book" and throughout the rest of this blog post I'll refer to it as tBWB.

If you're not familiar with this book, it's okay.  Many people aren't.  But it's notorious in the WoT community for its "questionable" artwork.  It's a reference book that originally came out in hardback in 1997, between Books 7 and 8, and mostly covers world history and nations / cultures.  It's been reissued a few times, in a different size with a different cover, and currently exists in North America as a trade paperback.  In the UK, they have a version with only maps (none of the "questionable" art... we'll get to that later).

Being a huge fan at the time, I snapped it up, even though I thought it extremely premature to release a reference book for the series when it was clearly far from complete.  Obviously it was a simple attempt to cash in on the success of the series, rather than providing a true reference to the world Jordan had created.  Rabid fans like me enjoyed learning about the history and various general information - with one caveat, of course.

So as I said, I bought this at the time because I was a sucker for anything WoT-related.  Notes and new artwork?  A map of the entire world?  Cool!  I didn't even know it was coming out, I merely noticed it in the bookstore one day, thumbed through it a bit and went ahead and bought it.  I've tried reading it all the way through, but I could never manage.  It's like reading an encyclopedia straight through - which, of course, is why you can't read it like that.  It's a reference book.  Duh.

The book was co-written by Teresa Patterson, using Jordan's notes.  It was created by a "packager," which is some other company that puts together the project with the main publisher and author's approval.  Patterson later went on to do another "packaged" guide, for Terry Brooks' Shannara series. 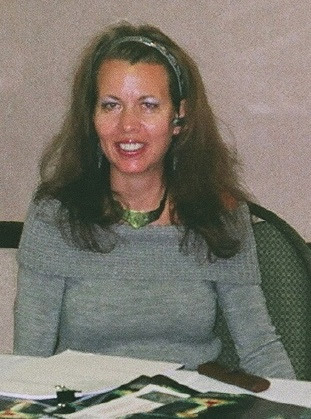 From what I've read about the project, Patterson contributed very little of her own text.  According to encyclopaedia-wot, for some passages, Jordan told Patterson to "write what she thought would be correct," in order to give it a feel that it had been written by a historian in his world.  Therefore the ruling on this book (and confirmed by its Preface) is that it is "broadly canonical," and parts could be inaccurate.  Because sometimes recorded history isn't 100% accurate.  History is written by the victors, right?

There is a great interview with Teresa Patterson regarding tBWB that you can find here.  She sheds some light on how the book came together.

So on one hand it's a handy reference, if you really want to know more about the world.  On the other - and here is the caveat I mentioned earlier - who knows what is true and what is false.

Since my other blogs discuss the covers, might as well devote a small section to this one.  It's the cover that gives it the nickname of "Big White Book," obviously. 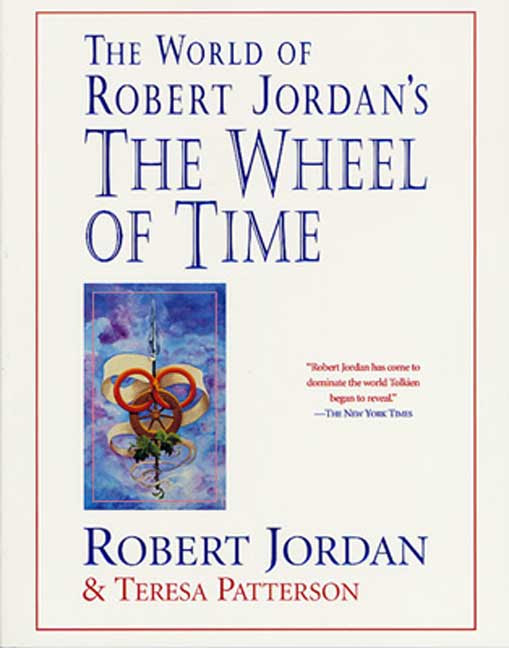 Not a very interesting cover.  The Wheel, Snake and Spear collage is just from the painting of the Randland maps that are in the interior cover of the series hardbacks.  There was an alternate cover for this book, featuring different elements of the map painting that could be found in the paperbacks: 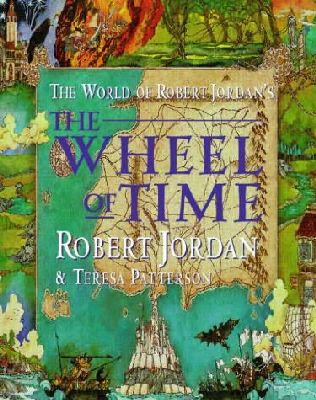 Nothing new or exciting.  Moving on.

So you may be wondering... should I bother with tBWB?  Well, the book is largely unnecessary for a regular fan, because most of what you need to know for the series is revealed in the series itself.  But there a number of tidbits of new information that help round out and reveal more about the world.

The main thing this book provided (at least for me) was the first map of the entire world.  Before, all we got was the Randland continent, which is actually just a small part of a much larger continent.  The series has been focused on Randland, and with the last book on the horizon, it's obvious that Jordan never intended to properly explore the other continents that were now revealed: Shara, Seanchan and the Land of Madmen.  I don't even think the Land of Madmen has ever been mentioned in the main series.  This book only dedicates a few paragraphs to it.

I posted the map of the world from tBWB in the post for Lord of Chaos (Book 6), but here it is again, since apparently it pops up in Google search results a lot, and I can always use more views.  :) 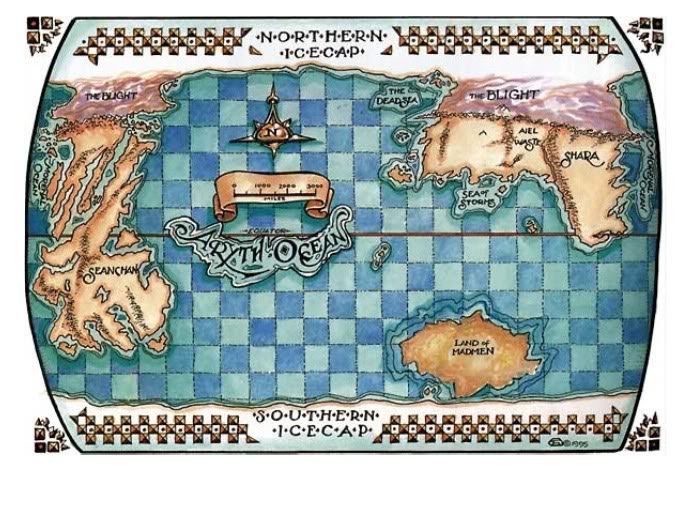 The Strike at Shayol Ghul

Bits and pieces of this story were revealed in The Shadow Rising (Book 4), when Rand entered the glass columns at Rhuidean, but in Chapter 4 of tBWB, titled "The Fall into Shadow," the full details of Lews Therin's strike on Shayol Ghul (against the Dark One, when the male half of the Source was tainted and turned all male channelers mad) are revealed.  This, along with the "Age of Legends" chapter, are by far the most interesting parts of the book.  Worth reading, definitely.

There's actually an entire chapter on Shara here, albeit 5 pages.  Some of the info revealed about this mysterious continent in tBWB is revealed in the main series later on, but at the time this was a treasure trove of new knowledge.  I kept expecting Jordan to involve Shara somehow, but he never did.

This book provides the best background on the Forsaken you can find.  It's pretty interesting, and worth reading through if you really want to know more about these enigmatic people from another age.  The little tidbits about the Age of Legends Jordan reveals in the series keeps it mysterious and fascinating, and the revelations in this book only whet your appetite for more.

The rest of the book is either information you can find in the main series, or is just unimportant, trivial and arcane knowledge.  There is some additional history concerning the time between the Breaking and Aiel War, but it's nothing earth-shaking.

This book's claim to fame is not its wealth of questionable information, but rather the questionable illustrations found within.  They were done by Todd Cameron Hamilton, of whom very little can be found on the internet.  He's done plenty of other fantasy artwork, though, primarily in gaming / RPG books.

Anyway, these illustrations have been completely vilified by much of the WoT community.  And it's understandable, once you see some of the drawings.  Now, I felt they were okay, I certainly didn't think they were the worst ever... but many of them are pretty wretched.  I'm sure I've mentioned this in earlier blogs, but many of the character sketches are atrocious and look like a child drew them.  Other illustrations, like the ones on the sidebars of objects, are decent.  But overall, hardly worth buying the book for.  Which probably explains why the UK edition no longer has these illustrations.


Many people thought that Todd Cameron Hamilton was just a bad painter, but he's not.  As Jordan explains in an interview, Hamilton got screwed on the contract.  The packager wanted five times as many drawings as the contract called for (at a flat fee), and in color instead of black-and-white.  Getting paid the same for five times more images in color than ones in black and white... well, you can see why they were uninspired.

His other artwork is pretty good.  Here's an example from The Visual Guide to Xanth, another packaged reference book that's somewhat pointless to have at this point (though I do have a copy):

With the series coming to an end, talk eventually turned to a new guide.  One that was as comprehensive as you can get.  Harriet McDougall (Jordan's widow and editor), has confirmed that there will be a new guide, put together by Team Jordan.  This guide should be the "be all, end all" of Wheel of Time guides, from what she has said.  It will consist of a majority of RJ's notes, feature info on all characters in the books (over 2,000, I believe) and just be all-around awesome.  At least I hope so.  This will be a true Guide / Reference / Encyclopedia, turning tBWB into an outdated primer, nothing more than a collectible.

Will I get it?  Probably.  I'd like to look at it first, though.  If it has new (and quality) artwork, I probably will.  In terms of tBWB, those new to the series can skip it, unless you're a collector or really into the series and have to have everything related to it.  Otherwise wait for the new guide.  According to sources, it should be out a year or so after A Memory of Light.

The Wheel of Time is Complete

Email ThisBlogThis!Share to TwitterShare to FacebookShare to Pinterest
Labels: retrospective, robert jordan, the wheel of time