The Greatest Jigsaw Puzzle of All Time

My wife and I do puzzles on occasion.  These days we look for interesting and unique puzzles, as regular ones don't always cut it.  I've blogged once about a puzzle (Béatrice Coron's "All Around Town").  We did another one recently that was interesting enough to prompt a short post.

We occasionally go to this really cool used bookstore in Mountain View, CA called BookBuyers (they have 4 total locations, in CA and HI).  It's a huge place - not as big as something like Powell's in Portland, OR, but still quite large.  They have more than just books, selling used VHS tapes (who buys these?) and puzzles, among other things.  You can easily spend an hour or so in there just browsing around.

Anyway, we were browsing their puzzles and found one called "The Greatest Jigsaw Puzzle of All Time": 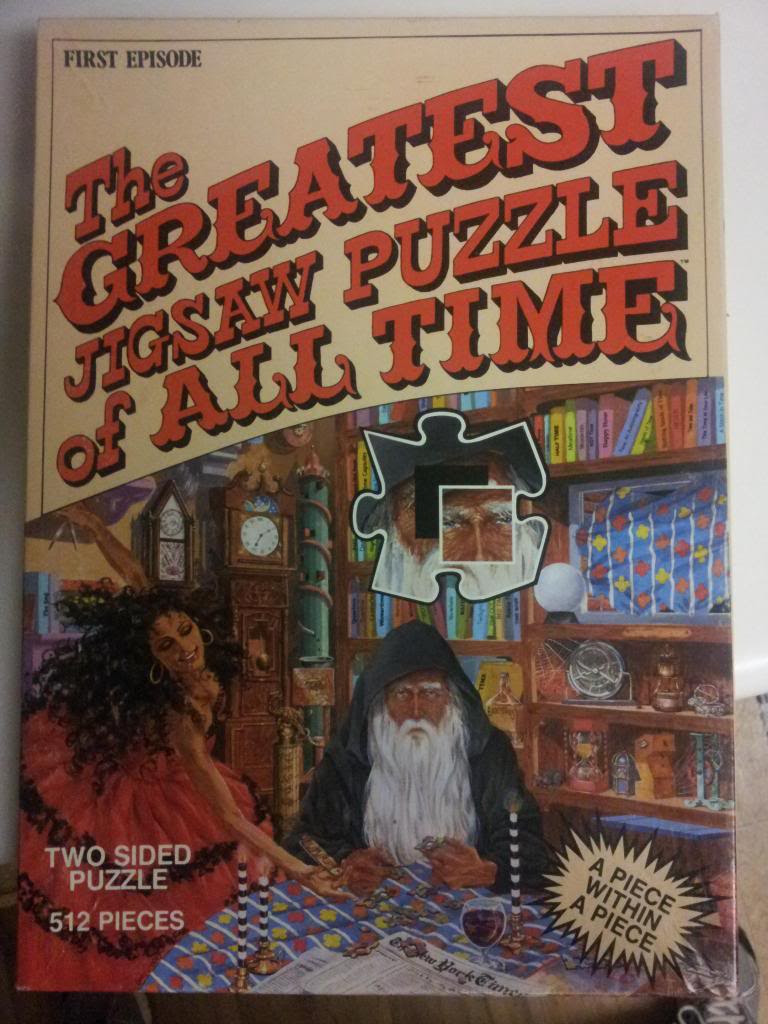 It's double sided, and features a "piece within a piece," which means each regular piece has a square hole in the middle that can be filled with a separate square piece.  The front side of the puzzle is a simple picture, while the back side features a ton of clock faces - one for each piece, in fact, the face being on the square insert pieces.  The back of the box touts:

There is a pattern to the order in which the little clock hands are inserted into the hundreds of faces.  Unfortunately, you can't discover the patterns until the puzzle is assembled and you can't assemble the puzzle until the pattern is known.  Does this sound mildly difficult?

I don't know about you, but when I see something like that, and it's only $6, I go into "Challenge Accepted" mode. 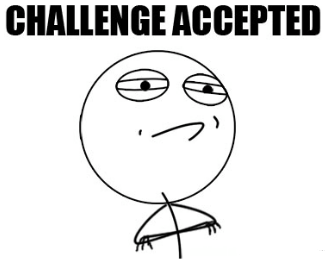 The Easiest Jigsaw Puzzle of All Time

So one night we sat down to do it.  We got out the puzzle mat out because we figured the "greatest" jigsaw puzzle of all time should be hard, right?  No way we'd finish it in a single sitting, we'll have to roll it up for later.

We finished it in two hours.  It wasn't hard at all.  We did the front face, of course, and the square pieces were a cinch to insert, expect for a few places.  Some spots looked very similar, like the red dress of the woman.  For these we guessed on some of the placements, figuring it looked okay.  But altogether the puzzle was a breeze.  Somewhat disappointing.  We didn't need to look at the other side at all, like the box said we would. 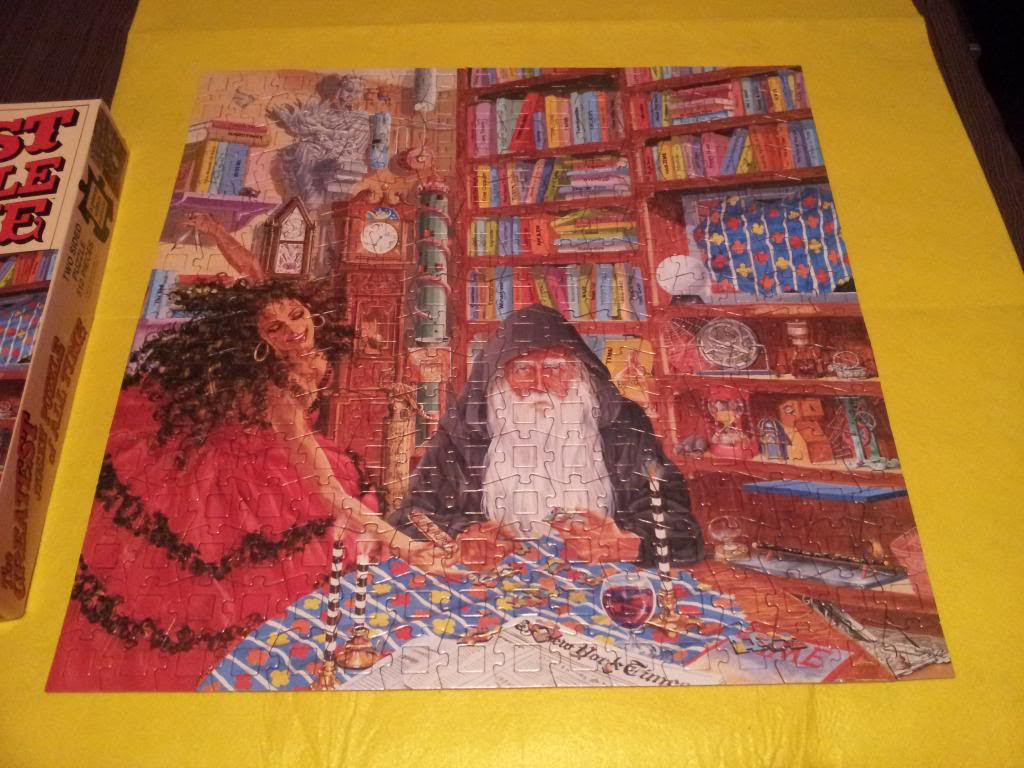 Still, we decided to flip it over (which was fun) and try to figure out the "pattern" that is supposedly key to solving the puzzle we just solved.  The back was all golden and shiny, with 512 clock faces.  Somewhat intimidating, and you can easily see how it would be impossible to assemble the puzzle from only the reverse side, as each clock face was tilted at some random angle... but wait a second, maybe it's not so impossible...


...it didn't take us long to figure out the pattern of the clock faces.  Starting in one corner and spiraling into the center, the clock hands are all black, and move from 12 o'clock onward, at 5 minute increments for each.  It was hard to notice at first since each clock face was rotated at a different angle.  Once it nears 12 o'clock again, the pattern resets, but with white hands.  With this new knowledge in hand, we discovered that we had only 6 of the square inserts in the wrong spot.  Not too shabby. 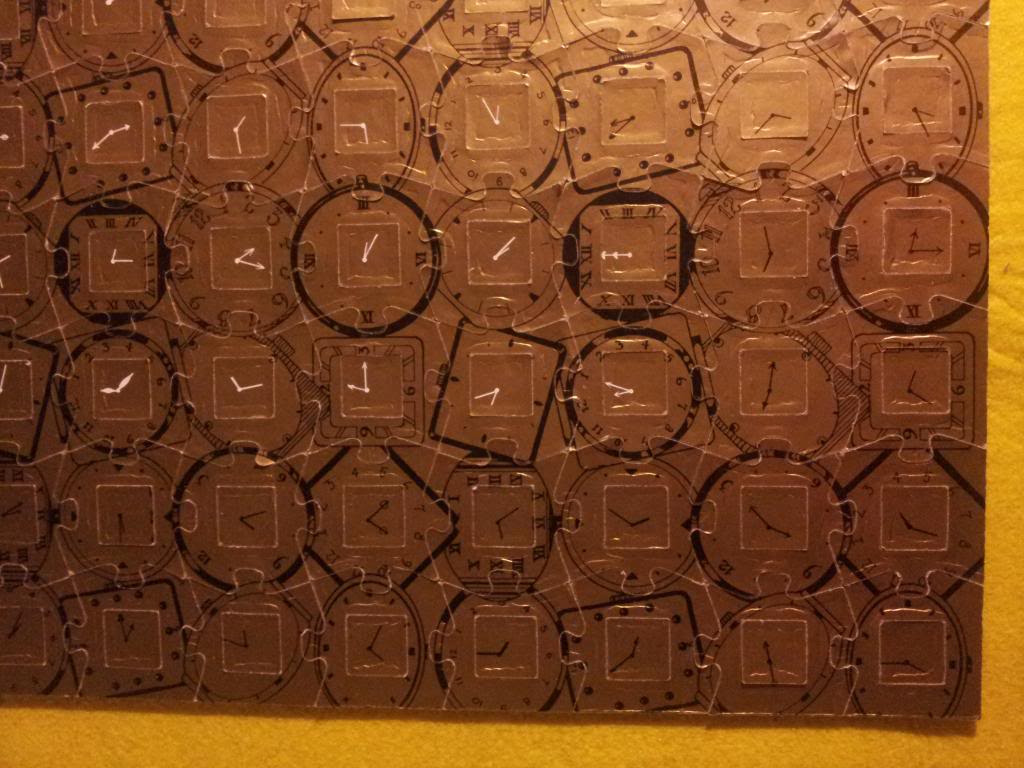 So in a way... the back really was necessary to verify that the puzzle was solved correctly.  But hardest of all time?  Pfft.

That's when I realized it wasn't about difficulty.  It was about time.  Literally.  The various clocks and timekeeping devices, time-themed books on the shelves and Father Time on the front image, and all the clocks on the back... it's just the "greatest" one regarding time.

Which is kind of funny, considering that it took no time at all to put together.
Posted by Brad Murgen at 5:42 PM

Email ThisBlogThis!Share to TwitterShare to FacebookShare to Pinterest
Labels: puzzle