As I have mentioned in prior posts, my wife and I like to do puzzles, preferably interesting and unique ones.  A while ago we did one in a series called "Impossible Puzzles," based on the art of Alex Beard.  The one we got was called "Red Peacock." 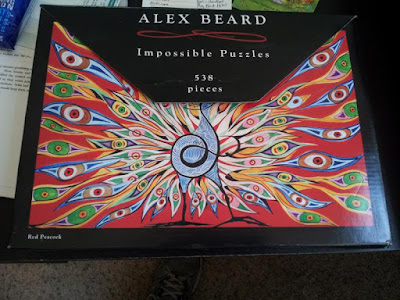 I had never heard of Alex Beard until we got this puzzle.  Born and raised in New York City, he eventually moved to New Orleans to pursue art, opening a studio there, etc etc.  After Hurricane Katrina hit the city in 2005, he closed his studio and moved back to NYC, but has since return to the Big Easy, reopening his studio and spending time in both locations.

His art style is what he calls "Abstract Naturalism," which involves the use of the Golden Ratio in the abstract lines that form the base of the objects (usually animals) in his paintings.  It's an interesting style that directly influences his line of Impossible Puzzles (of which there seem to be 12).

Now, of course the puzzles are not "impossible."  They can be solved, though they are a bit harder than normal since the pieces don't interlock, aside from the border.  And speaking of the border, it was very cool how the inner edge is straight as well.  It's simply a frame for the main image, with a little bleed over to help you place the initial pieces. 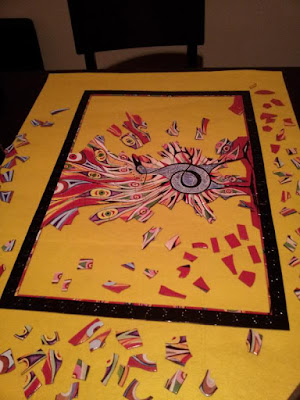 It was tough at first, since the pieces didn't interlock.  We focused on the center peacock and worked from there.  It took a few sessions to put together... unfortunately this is not a good puzzle for a roll up puzzle mat.  Since they don't interlock, much of it shifted around when we stored it, so we lost time moving chunks back together after unrolling.

Not the hardest puzzle we've ever done... but definitely challenging and a nice change of pace.  Once we got a third of it together it grew much easier because we understood the pattern of the pieces (they are cut along the lines in the art).  We'll have to try a different one sometime, since all the others are more mosaic in design than the Red Peacock one.

For whatever reason, I don't have a picture of the finished puzzle.  Sorry.  But we did finish it, for real.

A feature of these puzzles touted everywhere is how you can create your own puzzle designs.  Or in other words, use the uniquely-shaped pieces to create new images and designs.  The way the pieces are painted allow you to do that, without it looking weird.

We played around with it a bit, after completing the puzzle.  We didn't make anything extravagant, but you can see from what we did below, how the art on the pieces can be part of your unique design.  It's definitely a great way to engage a child's creativity; you could not even bother with the actual puzzle, just let people play with the pieces and design.  I probably would have called them "Endless Puzzles" instead. 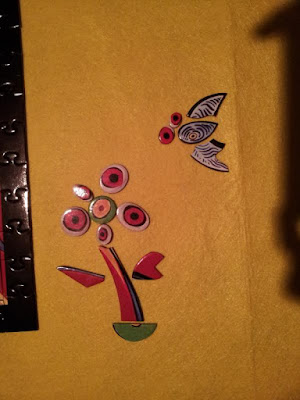 It says in the box that you can submit pics of your creations at Alex Beard's website, but I couldn't find where.  There's not even a section there specifically for the Impossible Puzzles - the unique alexbeardimpossiblepuzzles.com URL simply redirects to his main site - so I'm guessing whatever they had has been taken down.  And there haven't been many updates to the site in general over the last year or so.  I wonder what he's been up to?
Posted by Brad Murgen at 2:33 PM

Email ThisBlogThis!Share to TwitterShare to FacebookShare to Pinterest
Labels: puzzle