As I've mentioned in the last few Wheel of Time blogs, a sequence from the final book, A Memory of Light, was cut.  This sequence concerned Demandred and some of what he was doing in Shara throughout the series.  It was cut for pacing reasons, and because Harriet McDougall (Jordan's widow and editor) thought it introduced too many new elements when things should be wrapping up.

Later, Sanderson was approached by Shawn Speakman to donate a story to his Unfettered anthology (to help pay for medical bills stemming from cancer), and was able to offer up the deleted Demandred scenes as River of Souls, a short story.

So here we have it, the last Wheel of Time story.

The country / continent of Shara (I would say it's a continent) has been shrouded in mystery the entire series.  Jordan drops little tidbits and hints about it here and there throughout, we see a few Sharans (Graendal kept their rulers as pets for a while) and we definitely get more information once Noal Charin (Jain Farstrider) truly enters the story (in Book 9, Winter's Heart), but the continent is never seen on-screen and Jordan said it never would be at signings and Q&As.  It seemed fascinating and I always hoped Shara would be involved in the storyline somehow, like Seanchan is.  It's their world too. After Book 13, Towers of Midnight, I despaired of anything Sharan being featured.  Then came Book 14, A Memory of Light... and a Sharan army, led by Demandred!  I've gone over this in the blogs for Book 14.  But I'll repeat, I loved the sudden reveal and inclusion at the end.

In River of Souls, we get more info on Shara than ever before.  However, given the introduction to the story by Sanderson, much of it (terms, names of places, etc) is from his own imagination and not Jordan's notes.  So as he says, the high-level events are canon, but the specifics are not.  Either way, it's a fun read, and everything he came up with fits into the little we know of the culture; nothing felt out of place to me.

What I liked is how differently the Sharans see the world that we're only familiar with from the viewpoint of the Randland / Seanchan continents.  Instead of the Pattern, they call it the Grand Tapestry.  Channelers are enslaved and kept separate from the rest of the population, tattooed in such a way that you'll always know who they are.

They also have their own prophecy, that of the Wyld, the Dragonslayer.  The Sharans believe this person will save them from the Dragon (Rand, of course).  Demandred essentially comes in and begins to fulfill their prophecies, freeing slaves (called The Freed) and rising in power, until he has to journey down into Angarai'la, the River of Souls (a gorge with a river leading to a "holy" cave), and return to become the Wyld.  He also knows that there is a male sa'angreal from the Age of Legends down there, which is what he is really searching for.

The Prophecies of the Wyld

From the story, it seems that Demandred fulfilling the prophecies of the Wyld was somewhat of a mistake at first.  His intention in freeing slaves and such was to create chaos (Book 6, Lord of Chaos, anyone?).  Later, he appears to fall in love with a Sharan (Shendla) and take the prophecies seriously, for it will bring him Sakarnen and an army of Sharans for the Last Battle.

Side note: In A Memory of Light the sa'angreal he finds is called Sakarnen.  Here in this story what he finds is a cup-like object called D'jedt, also known as the "Scepter" in the Age of Legends.  He combines it with some rod he already had, and I'm guessing this combo he named Sakarnen later.


This whole storyline is fascinating.  Sanderson's intent was to make Demandred somewhat sympathetic, to show that he didn't have to be defined by his single flaw: absolute hatred of Lews Therin.  During his time in Shara, he could have had a different life with people who cared for him... but his hatred overrode all.

Sanderson notes in the introduction that there could have been an entire series focusing solely on Demandred's life in Shara, on how he rose to power and fulfilled their prophecies of the Wyld, just as Rand rose to power and fulfilled the prophecies of the Dragon on the main continent.  Now how awesome would that be?  Jordan talked about "outrigger" and prequel novels - things like the story of Tam al'Thor finding Rand on Dragonmount, or Mat and Tuon returning to Seanchan to restore the Empire - but something like this would have been much cooler to read, as opposed to the single taste that we did get (New Spring, which was mediocre).

To Hide or Not to Hide

As I mentioned in the second half of my blog for A Memory of Light, now that I've read this story, I'm a bit torn on Jordan's treatment of Demandred's storyline.

On one hand, it would have made for an awesome counterpoint to Rand's story throughout the series.  Learning about this other land along the way, anticipating the day when Demandred finally reveals himself...

On the other, though, part of the fun of reading the series is constant mystery and guessing when it came to unknown lands and the activities of the Forsaken.

I loved learning more about Shara in the last book and this story, but in the end, I have to concede Jordan made the right decision.  Wondering where Demandred has been the entire time was one of the great mysteries of the series.  It gives you something to talk about and getting readers to do that is a mark of a great writer.

However... Jordan could have maybe given us a little more on Shara during the main storyline.  Just a little.  That's my only gripe.  I want to know more!  That's another mark of a great writer, by the way.

Is It Worth Buying?

I will admit that I bought Unfettered solely for this story, because I'm that much of a WoT fan.  And I will, eventually, read all the stories in the anthology.  But if you're not a hardcore WoT fan, you're not missing much by skipping the story.  As I said before, it's fairly short (13 pages) and you can thoroughly enjoy A Memory of Light without it.

I personally wanted more views into Shara, so it was a no-brainer for me, hardcore fandom aside.  But I do find it interesting that I seem to have more to say about this story than the entire first book the series, The Eye of the World.

Either way, if you're interested in helping Speakman pay off his medical bills, or are a fan of short stories in general, it's worth buying.  There are a number of big names in here, with a variety of stories, so surely there will be a half-dozen or so you'll like.  And the book itself is well-crafted, one of the better-looking hardbacks I've bought in a while.  It's also available in a wide variety of eBook formats.

Purchasing options can be found on the Grim Oak Press website.

So thank you, Shawn Speakman, for giving us one more glimpse into the world of The Wheel of Time. 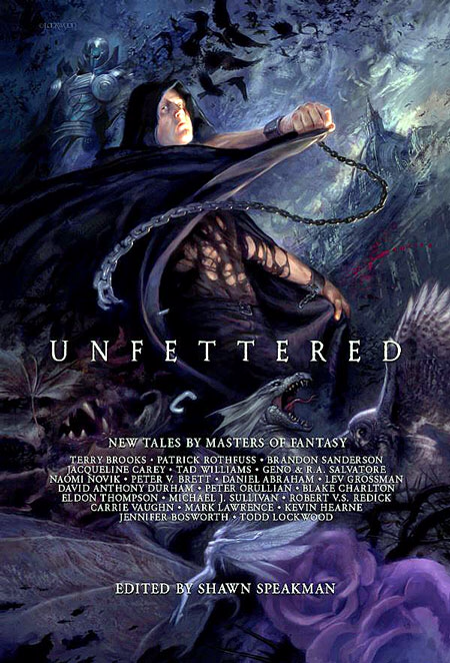 Cover and interior illustration art (the icon for this blog) is copyright Todd Lockwood.