Eddings followed up his first fake autobiography, Belgarath the Sorcerer, with a second one, told by Belgarath's daughter, Polgara.  Just like her father's, it clocks in at over 700 pages and drags in places.  Sometimes there's no need to retell the same events from a different perspective.  Especially when they contradict things yet again.

I honestly don't remember when I first read this book... but I do remember that I had a Science Fiction Book Club version (you know, the smaller hardbacks), so it was probably around 1998, after I left college and got a job.  I donated the book 4 years ago when I moved across the country, so I had to go find another copy for this re-read.  Sadly, it's not in ebook format yet.  The Rivan Codex, which is the final book I'll be doing in this retrospective, is the only one in ebook format for some reason.  Del Rey's probably too lazy to OCR / scan in the original text.

Since many of the things I talked about in the previous blog for Belgarath the Sorcerer apply to this book, I'm going to instead talk about each major section and my thoughts.  Overall this book is okay... it's on par with Belgarath, but neither of the autobiographies are as good as either main series.  It's really only worth reading if you absolutely love the Belgariad and Malloreon, and can't get enough.

First, the cover.  As usual, nothing special.  Polgara in front of the Tree in the Vale with an owl on her wrist, presumably Poledra, her mother. 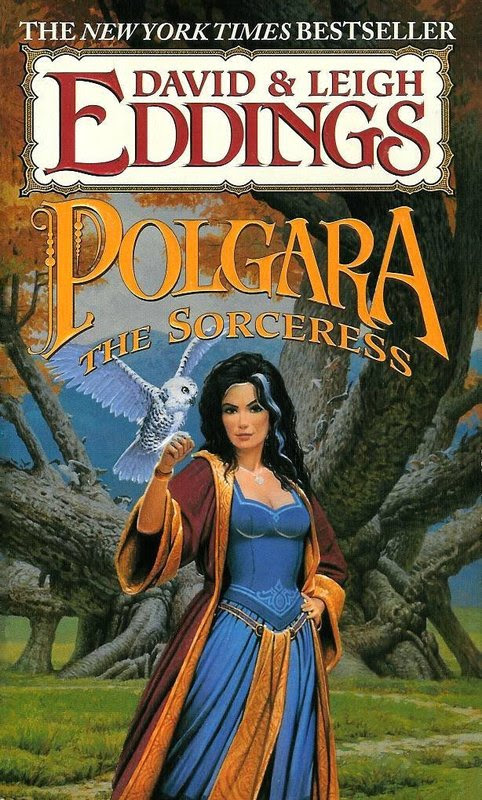 There are different versions, of course - and a decent amount of fan art for Polgara out there, since she's a very distinctive character - but this one below is probably my favorite. 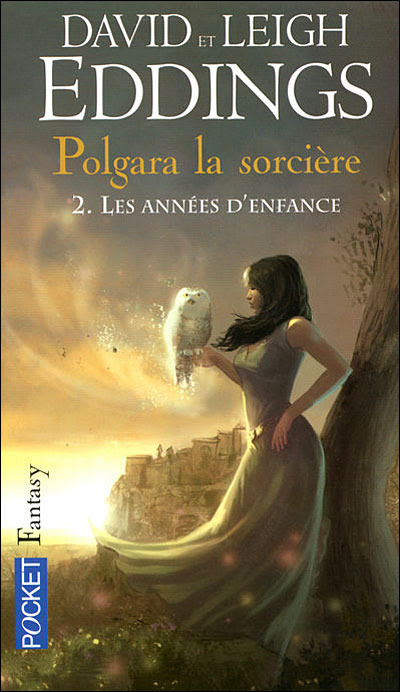 You can find more covers on the David Eddings Wiki.

This first section covers Polgara's childhood and her bond with Beldaran, her twin sister.  It always seemed weird that Polgara was a tomboy growing up, though compared to how long she's lived (4,000 years) it's only seconds in the grand scheme of things.

A few major things happen here.  Polgara learns that she has the power of the Will and the Word, while Beldaran doesn't.  She learns that her mother, Poledra, didn't die giving birth to her, and that she had to hide as part of the Purpose they are all following (the eventual Godslayer and new God of Angarak that will fix the Mistake).  Poledra, it seems, has been with Polgara all this time.  I don't believe Polgara mentions that she had always been guiding her in the Malloreon, but I could be wrong.  It feels like something Eddings threw in later.  It works better than some of the other inconsistencies, though.

The last thing of importance is Polgara essentially becoming the guardian of the Rivan line.  She hears the Voice of Prophecy as well... it's the same inconsistency that popped up in the Belgarath book.

In this section, Polgara becomes closer to her father, learns what it means to be part of this elite group of Disciples, and comes to terms with her own abilities.  You get a better insight into what went on at Riva in the early days, for she spends a lot of time there, learning things like healing, herbs, surgery, etc.   She and Belgarath visit the Mrin and Darine prophets, whose ramblings are recorded down as the Mrin and Darine Codices that become important later.  Also, she kind of falls in love for the first time, with a Rivan named Kamion, who becomes the first Rivan Warder.

Now, they call him Brand in this one, but I could have sworn back in the Belgariad and Malloreon, that the title of Brand only came into being after the assassination of King Gorek, when the Rivan line went into hiding.  But I could be wrong.

Honestly, this section is pretty boring.  It's part of why it took me so long to do this retrospective.  I simply got bogged down in it and frequently read other things.

Polgara is tasked with going to Arendia and keeping the Angaraks from meddling in their affairs and potentially pushing the West into war, much like I had to push myself through this section.  It's quite dull and could have been done in maybe two chapters.

I guess Eddings was trying to establish why Polgara loved Vo Wacune so much.  It does explain how she became the Duchess of Erat and all that, which was nice to see.

Ontrose is the next person that Polgara falls in love with.  She actually wants to marry him.  Belgarath says this is not possible, of course, because Ontrose will grow old and die, while Polgara won't.  This section mostly continues the storylines in the previous section, so it's just about as boring.

There's also an offhand remark in this section about how Polgara hadn't seen Belgarath in a few centuries, and you have to stop and think.  What is it like to not see someone for two centuries?  What do you say when you finally meet up?  According to Polgara, this is what you say:

Vo Wacune falls at the beginning of this section.  Ontrose eventually dies in battle.  Finally done with Arendia.

See, I can flippantly disregard decades with a few sentences too!

The book picks up soon after.  The Rivan King, Gorek, and his family is assassinated by the Nyissans - all except their youngest son, Geran, one of many in the line named Geran.  Polgara and Belgarath rescue him and she becomes the guardian of the line, protecting them until the Godslayer comes.  They spend time at her Erat estate and then begins the long wait... moving around to various places in Sendaria and the Alorn Kingdoms.  Our old pal Chamdar (Asharak, whom Garion killed in Queen of Sorcery) pops up from time to time.

I've always wondered, why not just hide in Cherek from the start?  It's not easy for Angaraks to go to any of the Alorn Kingdoms; the line would be pretty safe.  Polgara does move them to Cherek and Drasnia and Algaria later, but I've never understood that.  I know they had to move because Polgara never ages and people would wonder... but still.

Also, working in the realm of prophecy... why should they be worried?  Countless times do the Angaraks try to end the line or this or that, and it never works.  Why would the prophecies be created if they weren't going to be fulfilled?  Prophecy can be a mess sometimes.

Pretty obvious what this section covers.  We don't learn a whole lot more than we knew before.  At this point you should know the story of Vo Mimbre.  Especially since there will be a test later.

We actually get to see Torak in this section, though, which is cool, since you rarely get to see him at all in the series.

This last section deals strictly with the Rivan line and the birth of Garion.  Annath is the town he was born in, where Polgara moved his grandfather, a stonecutter.  It's a good section and probably the best of the book.  Despite knowing how it ends, it's nice to see it finally fit together.

There is a really good part at the beginning of this, though.  It's about Gelane, one of the Rivan line.  He survived Vo Mimbre in the Algarian Stronghold and he knew who he was from an early age.  He never seemed content to be just a normal person and later gets involved with the Bear Cult.

It's a welcome change from the constant descendants that simply accept everything and lead normal lives.  As I was reading, I wondered why weren't more upset that they had to hide?  What if one of them did not want what Polgara wanted, i.e. to take up a simple trade and live in obscurity.  Gelane is the closest we get to that, but I wanted more.  How would she have dealt with someone who was apathetic and totally resistant to what she wanted?  Would have been a cool dynamic.

Just a few things I want to comment on before wrapping this up.

At a point in the Vo Mimbre section, I believe, Poledra tells Polgara that the Events and Meetings all come down to simple choices.  I'm pretty sure that in the Malloreon, they didn't know this until they visit the Seers at Kell.  I remember Belgarath or Beldin remarking that every Meeting between the Child of Light and Child of Dark probably had a Seer lurking around somewhere making a Choice.  But I could be wrong.

Towards the end of the book, Alara is devastated by her son Darral's death (Darral is Garion's real grandfather) and goes mad.  Ildera (Garion's mother) asks why Polgara can't just fix it with, you know... waves hand about.  Polgara says the mind is complicated and it doesn't work that way.  And yet... earlier in this book she's erasing memories from people for various reasons.  Poledra actually teaches her how to do this.  Um, okay.

There's more confirmation about the concept that everything is stuck in a loop until the Mistake is corrected.  Polgara comments on this in regards to Brand.  And that probably had something to do with the "ordinariness" of the males in the Rivan line that she protected.  Just keep chugging along, status quo, until it's fixed.

A final note about the line of Rivan Kings.  It would be strange to live for so long and see the line come and go.  Protecting them, keeping it secret, waiting for the Godslayer to come.  Eddings could have made this more tragic than it turned out to be.  Polgara often left to do other tasks, so she had breaks here and there, and she rarely seemed to get close to anyone after Ontrose.  She does get upset on occasion, but I would have liked to have seen her get really close to a few and be very devastated when they died, have her question why she has to go through this, etc... there's not much of that.  It's something I feel is lacking in the book.

Alright.  It seems it will have taken me about 3 years to finish this Eddings retrospectives.  That's too long.  But good things come to those who wait, right?

The final entry I will blog about is The Rivan Codex.  It's a mix of non-fiction and background notes for the entire series.  I've never read it before, so am looking forward to it.  Reviews seem generally positive.

Email ThisBlogThis!Share to TwitterShare to FacebookShare to Pinterest
Labels: david eddings, retrospective, the belgariad, the malloreon