It only took 2 1/2 years, but I've finally released Wilders, Book 2 of The Hope of Memory.  It's now available in trade paperback and eBook formats. 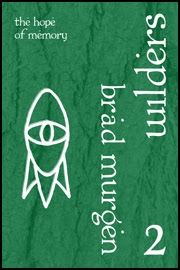 The trade is through CreateSpace.  It's available both through the CreateSpace site and Amazon (US and many of their international sites).  Here are the US links:

For the Amazon version, I've enabled most of their features, because I can.  The book has:

Matchbook = If you buy the Trade paperback, you can get the Kindle eBook for FREE
Kindle Lending Library = If you have Amazon Prime, you can borrow the eBook for FREE
Lending Enabled = You can lend your copy of the eBook to other users
KDP Select = Occasionally Amazon may offer the eBook for FREE for a limited time as part of a promotion
No DRM = I don't care about DRM anymore

The eBook is exclusive to Amazon for at least 90 days, to be able to use these features.  If I get feedback that people would rather have the eBook in a non-Kindle format, I may switch it.  But you can get the Kindle app on any phone or tablet now, so it's not like it isn't accessible to virtually everyone.

Yes, I know there are three books in a trilogy.  I've been editing Rom Tar for about a month now, and it definitely won't take 2 1/2 years to release.  Primarily because I don't need to write another book before this one is complete (I wrote Rom Tar before editing Wilders).

There are some sections I need to rewrite, but nothing major.  I'm really looking forward to getting the third book out... writing a trilogy is harder than it seems.  I'll have a preview of the cover up soon.
Posted by Brad Murgen at 5:12 PM No comments:

Email ThisBlogThis!Share to TwitterShare to FacebookShare to Pinterest
Labels: rom tar, the hope of memory, wilders

The Apprentice Adept - The Retrospective

Anyone who's read my previous Retrospectives (The Wheel of Time and The Belgariad/Malloreon) might have noticed a mention of Piers Anthony.  He's another of the first set of authors I discovered as a teenager, when I first started reading fantasy and science fiction.

Piers Anthony has been active for nearly 50 years, having published a whopping 166 novels through December of 2013, according to his website.  His very first book was Chthon in 1967.  He's still writing today, though I feel his quality has dropped off considerably and he self-publishes everything now, aside from his long-running Xanth series (easily his most popular work, and the only thing he still has on a traditional publisher, with 39 total entries).

Anthony himself is a fascinating writer, though.  Here are some fun facts:

I could fill a whole blog post about him and his quirky ways, but I have other things to talk about.  In my Retrospective Conclusion post, I'll provide some references if you want to research him more.

The Quest for All Novels

Back to his works.  I became obsessed with Piers Anthony after discovering him and in the mid-90's began a quest to collect all of his novels, many of which had gone out of print by that time.  Every time I went to a used bookstore, I'd check the Anthony section for something I was still missing.  Every town I visited when travelling - I always made a point of finding at least one used bookstore for an Anthony check.

There were two books I had particular difficulty acquiring: Thousandstar and Pornucopia. 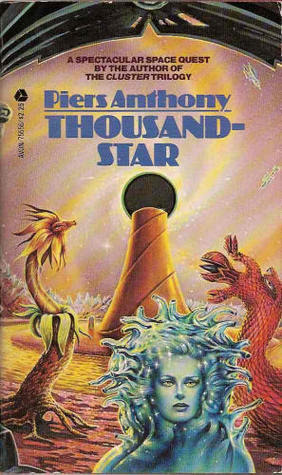 Thousandstar is the fourth book in the Cluster series.  I would always find the others in that series, but never Thousandstar.  Don't know if it had a shorter print run or that I was just unlucky.  Either way, I must have checked 40-50 bookstores (I'm not joking) before I finally found it.  Sadly, I don't even remember where that was... I want to say Chicago, or maybe one of the places I went to in Iowa.  Somewhere in the Midwest, as I lived in various places around there between 1991-2002.  But it was a joyous day when I did. 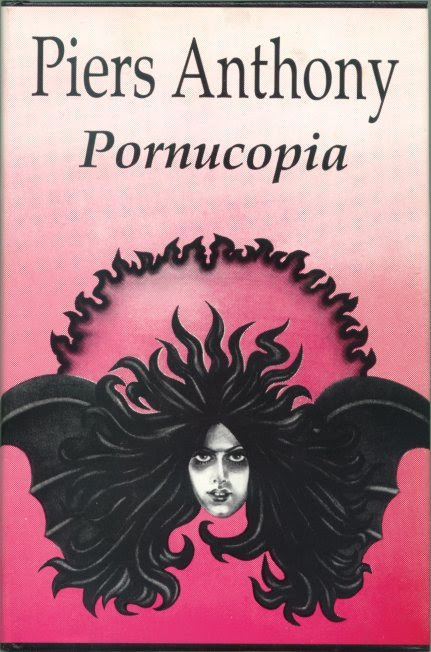 Pornucopia was somewhat of a legendary book at the time.  It was an erotic fantasy, totally different from anything else he had done, with a very small print run.  Only once did I actually handle one of the original hardbacks: at a bookstore in Chicago, that wanted $90 for it.  At the time I barely made enough to make ends meet and $90 was way too much for me.  I just wanted to read it... I wasn't concerned with what edition anything was.  So I had to content myself with looking at the copy they had and walking away.  If I found it today I'd buy it for sure, though.

Anthony later self-published a lot of his out of print works and I was able to read Pornucopia then.  He even wrote a sequel, The Magic Fart.  They are interesting reads, to say the least.

Of course, it's much easier to acquire his works today.  Anthony has self-published many older titles and websites like eBay provide older editions at the click of a mouse button.  But at the time, it was fun filling out my collection and reading a lot of Anthony's lost gems.  Most of his early work was science fiction, and nearly all of it was great.  I carted the Anthony books (over 100 at that point) along with me every time I moved, and finally was able to showcase them properly when I bought a condo in Reston, VA.

It was during that time (2005 or so) that I stopped collecting his novels.  I had been very disappointed with his recent work, particularly the ChroMagic series, which I thought was utter crap, and decided to move on.  I stopped reading him and before I moved across the country in 2011, I donated the majority of his books to the local library, keeping only my favorites, mostly 70's and 80's works.

Unfortunately Anthony had a penchant for extending series further than they needed to be, tacking on volumes that weren't necessary, in my opinion.  He'd write a great series with a good beginning and end, then ruin it with a few extra books.  It was like whoever originally published it knew it was best left alone, but he didn't care and simply took it elsewhere.  He did this with a number of series:

Now, I can't fault Anthony for wanting to write whatever he wants.  He clearly earned that over the years.  Much of this activity he says is from editors tampering with his work, and he simply decided to take his business elsewhere.  Obviously I don't know for sure, but it always happened after a clear closure on each series.  And the quality dropped off each time, so maybe editors tampering with his work was a good thing?

Or maybe I'm just reading too much into it.  Ba-dum-tish!

This brings me to the focus of this Retrospective, The Apprentice Adept.  A fantasy / sci-fi trilogy published between 1980-1982, he later extended it to seven volumes between 1987-1990.  The focus of this Retrospective will be the original trilogy only.  I'm not going to cover the four extra he tacked on later, which really should have been a separate sequel series rather than entries in the original one.  I wasn't a fan of them and besides, they were part of the Anthony books I donated in 2011, so I can't even read them now without buying them again.

The original trilogy was the first Anthony I ever read.  I honestly can't remember the last time I read them, though... it has to be at least 15 years ago.  I've forgotten much of what happened, so this will be a unique Retrospective.  I remember them being great, but that was with a teenager's mindset and experience.  I've read so much since then... how will I feel about them now?

As always, there will be spoilers for the entire series in each blog post, so if you don't want the series spoiled, you should hold off reading these until you've read the entire series.  If you don't care or have already read it, then dive on in.  Check the links below or the Fiction Retrospectives link at the top of every page.