Well, it's certainly taken a while to post the first entry in this retrospective.  You can always chalk it up to being lazy and busy with more "important" things (like work), but there's also a reason I wasn't entirely prepared to accept.

Now, as I explained in my overview post, The Apprentice Adept was one of the first fantasies that I ever read, along with The Belgariad and The Chronicles of Thomas Covenant.  I thought it was great, I re-read them so many times...

...but honestly, this will be my last.  I haven't read them in at least 15 years, and I must say, the years have not been kind to them, and I clearly have much different tastes in fiction now than I did at 13 years old.  Not to mention actual writing skills.

I'd rather not complain in these blogs, but from a writer's perspective, there are a few things I must talk about.

The age-old writing adage.  I haven't read Anthony in so long, I forgot how much "telling" he does.  It's out of control.  He doesn't let the reader infer anything from the text; he literally explains everything as if you're a total dumbass.  And he uses semi-colons every other sentence; he can't seem to help it.  It gets annoying really quick; I couldn't stand it.  I ended up skimming over much of the text, to be honest; he spends pages explaining something that should take less than one.

See what I mean?  I totally forgot how much he did that, but before I even got to the second chapter, it all came back to me.

So not exactly the smoothest prose to read, but Anthony always has interesting ideas.  It's what drew me to his work.  That and the "I do what I want" attitude, though that can only get you so far, I suppose.

Before I complain too much, there's still a story here.  So on to the content itself.  The book is really slow for the first half, but it has an interesting fantasy / science fiction hybrid going on.

To summarize, our hero Stile is a serf on the planet Proton.  In this futuristic society, serfs go naked (so basically 99.5% of the population) and work for Citizens.  The serfs play the Games a lot.  It's essentially a bunch of competitions between serfs and there are rankings, etc... it's complicated to explain and not relevant to the summary.  Suffice to say, Stile is really good at the Games, and suddenly someone is trying to kill him.  With the help of a nubile female robot named Sheen, Stile hides... and abruptly finds himself in a fantasy world when he passes through a mysterious shimmering curtain in the air.

This fantasy world is called Phaze and set on the same planet as Proton (occupies the same space in a different dimension).  Everyone on Proton has a double in Phaze.  Only when your double dies can you pass through the curtain between worlds.  With the help of a nubile female unicorn named Neysa, Stile discovers his double was an Adept, one of very few color-based magicians of this world, who was murdered.  It seems that whoever killed his double in Phaze is also trying to kill him in Proton.  Why?

And so the stage is set.  Stile moves between worlds via the curtain, and between non-human girlfriends (Sheen and Neysa), trying to stay alive.  In Proton he competes in the Games while in Phaze he seeks out the Adepts, trying to figure out which one he is/was.  The Adepts all go by colors... Stile eventually finds out he is the Blue Adept.  Spoiler!

Anyways, the book essentially ends with Stile realizing his powers and making peace with his disparate robot and unicorn girlfriends.

You can't have a Brad Murgen Retrospective™ without a commentary about the cover, now can you?  Thankfully there's no Darrell K. Sweet on The Apprentice Adept (though he did do the cover for the extension of this series, volumes 4-7 that we aren't covering, as well as many other Anthony titles).

The US cover is done by Rowena Morrill.  According to Wikipedia, she's "credited as one of the first female artists to impact fantasy cover illustration."  And an interesting aside, two of her paintings were found in one of Saddam Hussein's "love shacks" (safe houses) after the fall of his regime.

Iraqi dictators notwithstanding, it's a good cover, I like it.

Of course it's set on Phaze.  In fact, all of the US covers by Morrill are on Phaze.  Can't be on Proton, everyone would be naked! 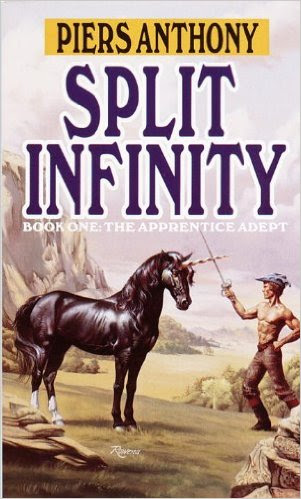 Contrast that with a European cover, of a naked Sheen (Stile's robot lover): 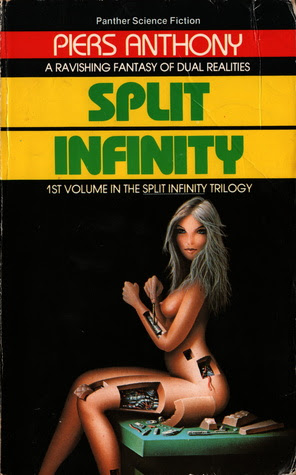 One of Piers Anthony's many quirks is that when he titles chapters, they are always one word.  I'm pretty sure it's 100% of the time.  I don't know why he does it, it seems... unimaginative.  Or lazy.  I don't know, it's something that's always bugged me.

Chapter titles should be used to evoke anticipation or mystery to the reader, or to sum up a theme for the chapter.  For example, I pick up a book and look at the table of contents, and see some interesting chapter titles.  That makes me more likely to read it.  Or with a series, you can maybe infer what's going to happen later based on the titles, and it heightens your anticipation.  Every time I got a new The Wheel of Time book, the first thing I did was read the chapter titles in the table of contents, and try to guess what was going to happen.  It was great fun.

Not so with Anthony.  Here are the chapters in this book:
Exciting.  Chapter titles really are an art, in my opinion.  It's just as important as the content of the book, or the marketing blurbs, or the synopsis, etc.  I'd rather not have chapter titles if this is all I'm going to get.

Another of Anthony's quirks is how much he focuses on sex.  He does this a lot, even in his Xanth series, which is generally marketed towards pre-teens.  It's prevalent throughout many of his works and sometimes it's downright uncomfortable.

This series doesn't have a ton of sex, but the characters are naked most of the time (because Proton) and Stile wastes little time entertaining thoughts of relations with Sheen and Neysa.  It wouldn't be all that bad, except it doesn't have much bearing on the story and it's treated so matter-of-fact.  It's just like, this hot female is really into me, let's go back to my apartment, oh she's a robot, that's okay let's get it on!

Anthony does this frequently, so it's hard to characterize his writing at times.  I mean, books with real depth and an important message have been banned for much lesser offenses, but you could easily find this naughty stuff in school libraries when I was a kid.

That said... whether it detracts from the story is up to your own personal tastes.  It doesn't bother me all that much, but it does get old and in my opinion it was completely irrelevant to the story Anthony is telling.

On to the Next Volume

That's about all I have to say about Split Infinity.  I'm not sure when I'll get to the next volume, Blue Adept.  I still have a backlog of regular books to read through.  And writing to do.  But I'll squeeze it in at some point.

Retrospective Overview
Posted by Brad Murgen at 10:12 AM