I wasn't expecting to like this book after forcing myself through the first one.  It's been so long since I read Blue Adept, that I honestly didn't remember it at all.

But it's actually not too bad.  And since I've conveniently gotten a lot of the complaining out of my system during the Split Infinity post, I'll spare you for the most part.  On to the book!

Stile continues his quests in both frames, Phaze and Proton, fantasy and sci-fi, shuffling between them via the Curtain.

On Proton, he's entered a new tourney with the hopes of eventually becoming a Citizen, and is also hoping to find out who's been trying to kill him with the help of his robot friend, Sheen.  Remember, his double on Phaze, the Blue Adept, was murdered.

On Phaze, he's also trying to find out who killed his Phaze-self.  He gets help from the Lady Blue (the Blue Adept's widow)—who initially doesn't like him but seems to be coming around—and his unicorn friend, Neysa.  This brings about some other challenges, which mirror the Tourney matches.

There's a lot going on in this novel, little side quests and characters and such that aid the story but really aren't worth mentioning, and like the first novel, some of it is boring, and yes, the writing style drives me nuts for the most part.  But as I said earlier, it's not too bad.  If anything, Anthony is good at clever plotting.  That's his strength, if you ask me.

Anyway, by the end we know who's trying to kill Stile.

Since the story shuttles between distinct quests in Phaze and Tourney matches in Proton, it's probably easier to discuss each world separately.  But first, let's get our bearings.

So I totally neglected to talk about the map in the previous post.  Not that you're missing much, as the maps are very basic, and only show Phaze.  And to be honest, they're not very useful, I think I referred to it once during my re-read?

Like the chapter titles, the regions have unimaginative names, and all the mythical / magical creatures have their own areas where they live, denoted simply by their names.  No cool place names or cities, etc.  Except for maybe Meander River?

The maps go side by side, Split Infinity on the left, Blue Adept on the right.  Sorry if they look a little crooked, they span two pages in the book.  I did some of my Photoshop Adept magic on the first to align it; I'm quite proud of myself.  The second one wasn't printed well in the book itself.

Both maps are credited to Chris Barbieri.


A funny aside, I remember as a kid I used to pronounce "demesne" as "de-mes-ne"—like actually as it's spelled.  It was a number of years before I learned that it was pronounced "duh-main".  Silly me!

The first Tourney game Stile has to play here is a football game, where the rest of his team are androids.  I don't believe Anthony is a big sports fan, but from the perspective of someone who is (I wasn't when I first read this, some 27 years ago), it was actually well done and entertaining to read.

Stile played in a non-traditional manner to keep his opponent off guard, like kicking field goals early without trying for touchdowns, frequent onside kicks, etc.  Such gameplay might actually work in today's game, and be a hell of a lot more interesting to watch, but no one has the balls to buck tradition in the college or NFL game.  Reminds me of that high school team that always goes for it on 4th down and always uses the onside kick.

The football round gets most of a chapter, while the other rounds are generally glossed over.  Subsequent rounds are: riddles (okay), giant mazes (eh), slot machines (eh; this is only one Stile loses, and only because of its random nature), ice climbing (eh), flute battles (pretty good, with a clever resolution), word puzzles (okay), sewing (eh), soap bubbles (eh)... but those are peanuts compared to the climax: interpretive dance battle.  More on that later.

At the end of the day, by virtue of how far he got in the Tourney, Stile guarantees himself additional tenure on Proton, so he's not going anywhere any time soon.

I probably should have touched on this during the blog for Split Infinity, but again, I was too busy complaining to really explore the content and ideas in this trilogy.  Sorry about that!

Stile has been visiting different Adepts to figure out which killed his Phaze double (the original Blue Adept).  He invades each of their demesnes to figure it out.

I've never understood how the Adept colors came to be, though.  Why does Blue use the magic of music?  Or where they come from, since there's so few humans in Phaze (humans seem to be relegated to random villages).  There's some talk later of why they create elaborate castles and demesnes, but the origins and stuff have remained unanswered so far.  Anthony is not the best at world building, as too much of it doesn't make sense, to the point that it's hard to suspend disbelief.

That's one of his weaknesses, and what makes much of his fantasy writing seem frivolous, in my opinion (his older science fiction is fantastic).  Anyway, let's run down through the Adepts we've met so far in the first two books.

We know that there are also Purple, Orange and Gray Adepts, but we haven't met them yet.  Will they factor into the final novel?  I honestly don't remember at all.

But first, the cover.  Another one by Rowena Morrill, in Phaze again (no nudity allowed in the US!), showing Stile's encounter with the Red Adept. 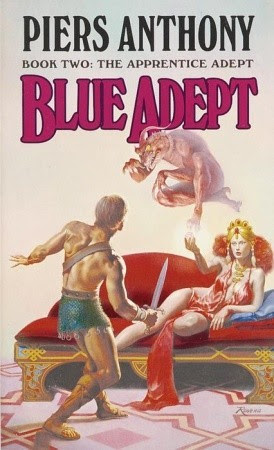 It's another decent cover, a typical fantasy-style cover of the day.  Stile's small stature is not readily apparent here (the book says he's 4'11", which is really small for a grown man), as he looks no smaller than the Red Adept.

It wasn't all that apparent on the cover for Split Infinity either, because Neysa is supposedly a runt of a unicorn... but I don't know why I'm criticizing the accuracy of a fantasy novel cover.  As we've learned from my previous retrospectives, artists get the simplest of details wrong, which drives me nuts.

For instance, Stile is supposed to be floating the entire battle.  I guess that would look weird as a still image, though, but a good artist could probably figure out a way to make it work.

And then you have the European cover... I think those are the Mound Folk?  I seriously don't know WTF those are. 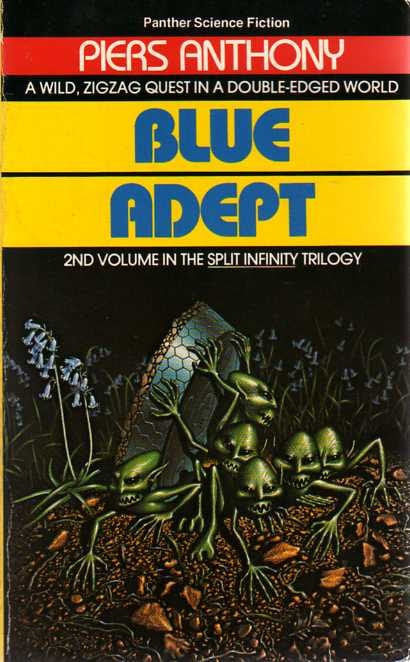 Wait, we can't forget about the Oracle!  An 80's fantasy novel can't go without some form of prophecy to remove the illusion of freewill from the plot (and generally muck things up).

The Oracle is in Phaze, and answers one—and only one—question for each person.  Basically, you go to the Oracle's residence and ask your question to an intercom and it responds.  That's it.  We don't actually see an Oracle.

This plot device has been used throughout both books, but I haven't mentioned it yet because it was basically a throwaway fantasy convention until the end of this book.  Stile used it in Split Infinity when he wasn't sure how to proceed.  He asked, "What is my best course of action?"  The answer was "Know thyself."  Basically, figure out you're the Blue Adept, duh.

In this book, when Stile finally confronts Red, they have a chat about why she's trying to kill him.  It goes something like this:


Local vampires don't like living near Red, and ask the Oracle how to be rid of Red's yoke.  Oracle answers: "Bide for two months."

Red hears of this and likes it not, so she asks the Oracle what her fate in two months will be.  Oracle answers: "Blue destroys Red."

Red decides to take the initiative and has the Blue Adept in Phaze killed.  Then in Proton she tries to depose of his double, Stile—but it turns out he's not that easy to kill.  And this whole thing becomes a self-fulfilling prophecy.  If Red hadn't asked that question, would she have still murdered the Blue Adept?  Or would something else happen to cause Blue to kill her?

Stile even decides he can safely fight the Red Adept once the Lady Blue reveals her Oracle question and answer.  She wanted to know what kind of children she would have, and it said "None by One, Son by Two"—implying that Stile, as the second Blue Adept, would be the father.  He figures the Oracle is always right, so he won't die confronting Red since he and the Lady Blue haven't, um, consummated their marriage (oh yeah, they get married towards the end of the book, forgot to mention that).

Prophecy is hard to use effectively in fantasy, because you don't want it to dictate too much of the plot.  In this trilogy it's used fairly well, and adds to the mystery of why someone would want to kill Stile.  I mean, we know why Red took action, but not the real why as to how Blue would destroy Red—if there is one.  The Oracle could just be playing them off each other.

That's right.  After a pretty cool battle between worlds, where Stile and the Red Adept move back and forth across the curtain trying to kill each other, Neysa and Sheen helping Stile in the Phaze and Proton frames, respectively, it all culminates in the next round of the Tourney.  Red is also one of the six contestants left in the Tourney at this point, and she and Stile must face off in an epic interpretive dance battle in the final chapter, with the exciting one word title of "Dance."

It's some Arabian story, where they are prince and princess of different lands, and scorn all their suitors, but dream of each other and eventually fall in love.  Which is amusing because the Red Adept is like a foot taller than Stile, and apparently hates men.  So the stage is set!  Literally!

They have to lie with each other and pretend to like it, dance and pretend-kiss, all kinds of pretend-stuff that's amusing when just the chapter before they had been trying to kill each other.

And at the end, as you can imagine, Stile wins after goading Red into getting angry about him getting close and pretend-touching her.  She really does hate men!

Book 1 — Split Infinity
Retrospective Overview
Posted by Brad Murgen at 10:14 AM No comments: