So did I really just spend over a year trying to do this Retrospective on The Apprentice Adept?  And it's only three books?

Man, I'm slow.  Been busy with work and stuff, you know.  Well...that and the fact that the trilogy wasn't as engaging as I remembered.  I promise to be faster on my next Retrospective (fingers crossed behind my back).

Biggest takeaway from this: I read a lot of crappy fantasy back in the day.  Getting something like this traditionally published now would be nigh impossible.  Fantasy has matured quite a bit, and today's generation of authors, publishers and readers are very different.

As I was going through this trilogy, I recalled that I had actually written to Piers Anthony a number of years ago.  I rooted around in my garage and found his response...dated JewelLye 25, 2000 (Anthony uses pun versions of the months, inspired by Xanth).

After reading it for the first time in probably 15 years, I can easily infer what I asked him:
Not surprisingly, I brought up the first two in my Retrospective Overview.  You can read the letter yourself in full below: 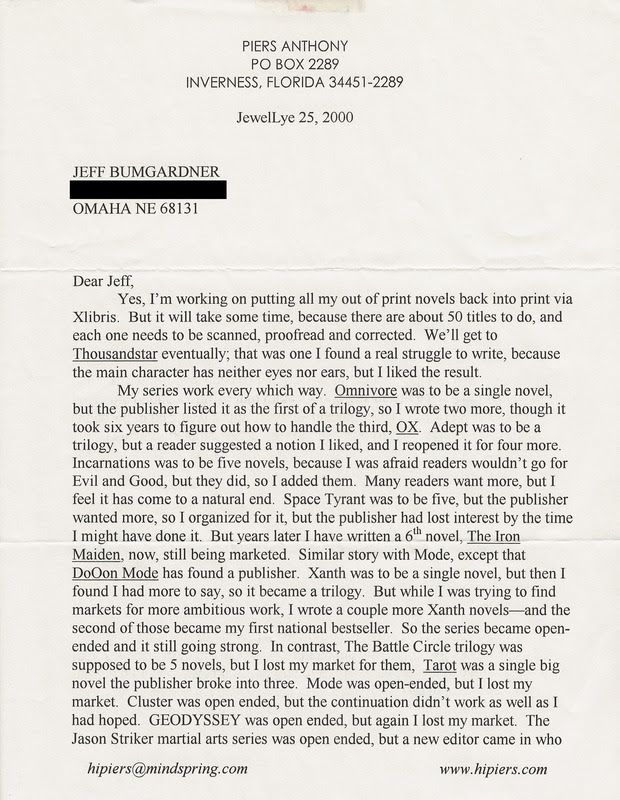 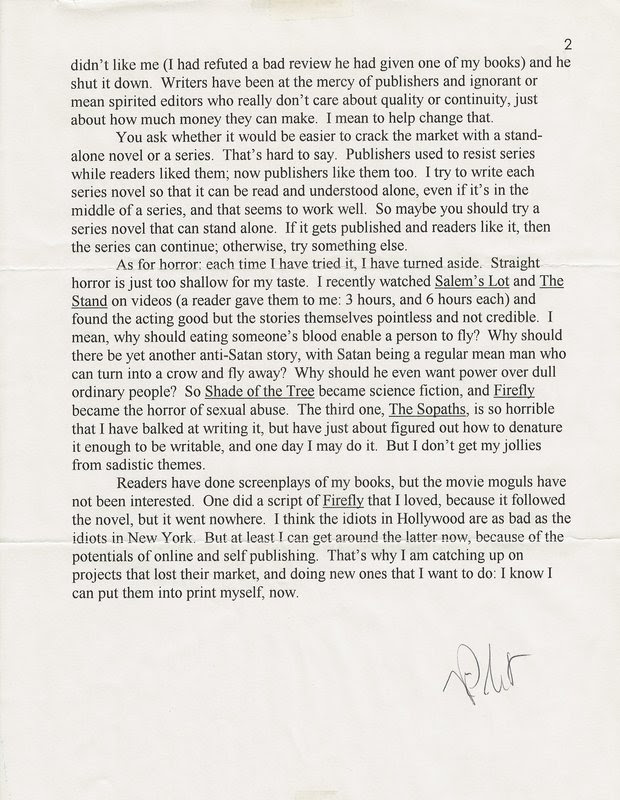 He gives a reasonable explanation for continuing a series.  I understand the urge to make something open ended (I'm doing that for my The Hope of Memory trilogy), and you can definitely do that and still make the series feel complete...but I suppose the challenge is how you continue the series.  Later works in a series / universe will always be compared to earlier ones, and audiences are harsh critics (and hypocritical; you want more, but not at the expense of tarnishing an "original"...typically you can't have one without the other).

Also note that he mentions balking at writing a book called The Sopaths because it's "so horrible."  He did eventually self-publish this book in 2011, and it's got some really harsh reviews on Goodreads.  I might have to check it out for myself, despite that...

References on the Web

There's not much Piers Anthony fan-related content out there.  Like David Eddings, Anthony's heyday was before the internet, so only the most passionate of fans have made some fan sites centered around the prolific author.

I remember there being a few, but it seems they have been swallowed by the void of the internet.  I could probably find them in the Wayback Machine, but honestly it's not worth it.  About the only real fan site existing now is a Wikia for Xanth (incomplete), with some attempts at Incarnations of Immortality and The Apprentice Adept content.

Beyond that, you're likely to only find articles and blog posts complaining about pedophilia and misogyny in his books.  As a kid it really wasn't so overt, but yeah when you read some of his stuff today, it's a bit cringey.  Although I think people need to realize that Anthony grew up in a much different time (he was born in 1934, remember), and his worldview is much different than someone born in the 70's or later.  Not trying to defend him, just providing a little perspective.

Of course, if you're looking for Piers Anthony on the web, the place you'd want to go is his personal website, Hi Piers.  Where the did name come from?  Glad you asked.  Before the internet he had an 800 number you could call to get author info and stuff.  It was 1-800-HI-PIERS.  I believe it's listed in a lot of 80s and 90s books, in the Author's Notes at the end.

Funny aside...after he shut down the 800 number, it was reused as an adult sex line.  I remember him mentioning somewhere that angry parents wrote him about that, as kids were trying to call the number listed in the older print runs of the Anthony books they had.

Anyway.  If you want to see what a website in the early days of the internet looks like, visit Hi Piers.  It's hosted by Earthlink, which is enough to make me cry (my parents still use an Earthlink address, and they pay a monthly fee for it).  But looking at his site, it's clear that web design has come a long way.  I remember in college in the mid-90s, using the Netscape Navigator browser to look at sites with horrible design exactly like Anthony's, all hosted on Geocities.  Ah, memories.

There's not much to the site these days, beyond his monthly newsletters, where he rambles on about what movies he's seen, what books he's read, politics, sex,  hatred of Windows, etc.

This is something I kind of missed while re-reading The Apprentice Adept.  I'm not sure when Anthony started doing it (mid-80's I'd guess), but many of his books have an Author's Note at the end.  In it, he usually talks about what happened during the writing, things that inspired it, etc.  For the Xanth novels, he always lists out readers who contributed puns to the book.

Most authors who include some kind of "Afterword" usually just thank people who helped get the book published and absolve themselves of any liberties they took when telling the story.  Anthony has always provided a bit of extra perspective on the writing of the book, a "behind the scenes" if you will...something you don't see often.

Sadly, these weren't present in The Apprentice Adept, otherwise I might have had more to talk about.

Will I do another Anthony Retrospective?  I'm not sure.  While not a very popular author today, his effect on the landscape of fantasy and science fiction back when it became a mainstream genre is considerable (I believe Ogre, Ogre, the 6th Xanth novel, was the first fantasy paperback to hit the New York Times Bestseller list), and it's important to talk about him and his contributions.

To be totally honest, though, I'll be donating my copy of The Apprentice Adept—I can tell you with all seriousness that I won't be reading it again.  I do still have my copies of:
I'm kind of scared to read any of them again, for fear of destroying more childhood nostalgia.  But it could be a good way to clear out more shelf space.

If I decide to do another Anthony Retrospective, it'll be after a few more important ones I want to do first.

Next up: Dragonlance Chronicles and Legends!
Previous: