I started reading this right away after finishing the second entry, Blue Adept.  Like the others, over the years I had completely forgotten what happened in this book.  It starts out alright...but unfortunately fizzles out and the endgame of the trilogy is somewhat lackluster.


So...not as awesome as I remember it.  Clearly this stuff was much more interesting when I was a teenager, first starting to read fantasy and science fiction.

In other words: I didn't know any better.

Anyway, there's a ton going on in this book, and events are rather complicated.  I've had a tough time writing this particular blog... every topic I try to talk about makes no sense without a bunch of caveats and "because X and Y happened, remember?"  Summarizing events didn't help either, because the simplest things ended up three paragraphs long.

So what does that tell us?

First, it speaks to how complicated Anthony's plotting was in what seems to be a rather simple trilogy.  Parts of the story drag, but he managed to pack a lot of content into three normal sized novels (each book is about 135K words).

Second, it tells me that perhaps I should "retrospect" this book differently than I have in the past.  Ideally a reader of this blog should have already read the series, and thus an in-depth recap is not necessary.

(That drives me nuts about some TV recap columns today, by the way... the writer simply summarizes the episode without adding anything new or interesting to it.  I know what happened in the episode, I just watched it!  I want to know your reaction and thoughts on it, analysis, blah blah.)

Last—and most importantly—it tells me that I spent way too much time trying to write a Retrospective on an obscure 35 year old book that hardly anyone is reading these days.  So I'll just get on with it, rather than try to be clever.

Stile wins the Tourney and becomes a Citizen.  Shocker!  It seemed the obvious conclusion, given he's an Adept in the other frame.  The final three matches of the Tourney are:
That's all it takes to be a Citizen.  And once a Citizen, all the others want to bet with Stile on random stuff, and he finds a way to amass a vast fortune through some clever betting... it's entertaining, but it's a bit too clean.

We do—finally—get to see more about the inner workings of the Citizens, which is something that's been lacking in the entire series.  Despite this, it's not that exciting.  They generally sit around in their estates and bet on stuff.

So here we have another cover by...wait.  No, it's not Rowena Morrill.  For some reason, they changed the artist for the third volume, and it's none other than our old pal Laurence Schwinger!  If you remember, he did the covers for David Eddings' Belgariad, which I covered in an earlier retrospective. 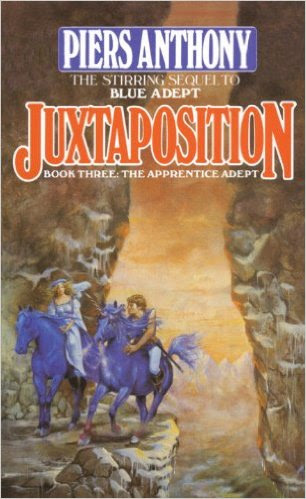 This cover is very simple, and easily my favorite of the trilogy.  It shows Stile and the Lady Blue on their honeymoon.  Stile is on the unicorn Clip, while the Lady Blue is on her steed, Hinblue.

Compare that to the European cover, which makes absolutely no sense.  It's a demon carving a naked woman out of stone?  Love the marketing blurb, though, which is something you'd never see printed on a book today: 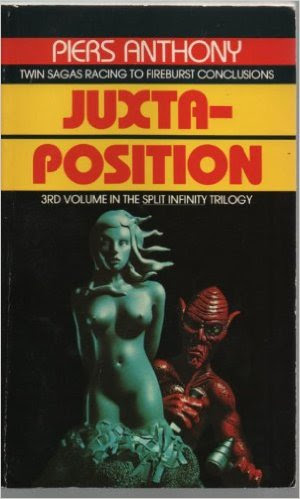 Stile's been the main character for this trilogy, but Anthony takes a detour in regards to Clef, a Proton serf that Stile defeated in the Tourney back in Book 2.  He's a gifted musician, and apparently the one destined to separate the frames (Proton and Phaze) by playing the Best Gosh Darn Music Ever on the Platinum Flute.  And all according to prophecy, of course.  Shocker!

I will say it's a nice play on the "hero of prophecy" trope, because fantasy at this time (early 80s) typically focused on a singular hero destined to save everything.  Stile certainly is the spearhead in "saving" Phaze (separating it from Proton to prevent its exploitation), but Clef has a huge amount of responsibility, maybe even more so than Stile.

In fact, many of the other side characters throughout the series are pulled in to perform monumental tasks, while Stile simply directs everything, much like a conductor.  Essentially, all his good deeds in the past reap considerable rewards in the future.

Alright, so there were a few new Adepts here, and clarification on an old one:
There's a Purple Adept that was mentioned, I believe...but is not in the trilogy (I honestly don't remember at this point).

We have another new map, revealing a bit more of the world, stretching as far as the West and East Poles.  Hey, it's a fantasy. 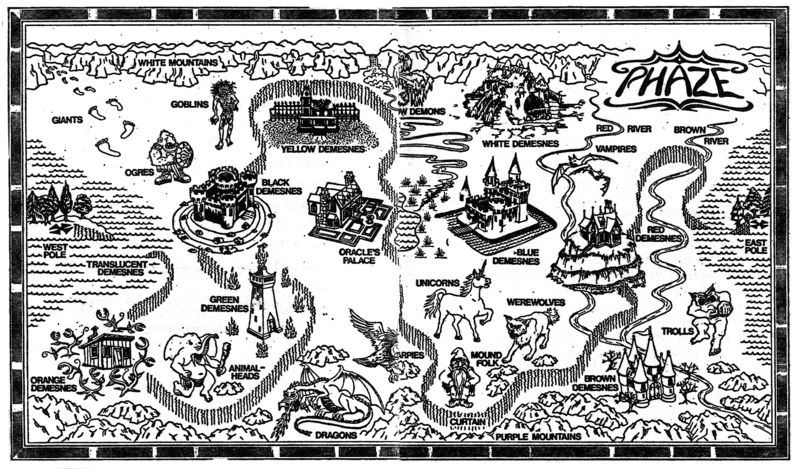 However, if you compare it to the previous maps, you'll notice it's actually different.  The Goblins are now to the west of the Yellow Demesnes, the curtain to the east of the Red Demesnes follows a considerably different path, etc.  It's not the best map to begin with, but they could try to at least be consistent.  Perhaps they wanted to illustrate how the curtain moves later on?

Most likely Anthony had no map in mind (I believe Xanth is his only other work—out of like a dozen series—that had a map, and that's just an analog of Florida), and probably didn't want one, but this was 80's fantasy, and every trilogy needed a map back then.  So they did the best they could.

Oh, so the identity of the Oracle is finally revealed, and it's none other than a computer that got stuck in Phaze when the frames separated.  I think there was an explanation as to how it still worked in Phaze (machines aren't magic), but I missed it and can't be arsed to search.

Essentially, the whole trilogy could boil down to this: the Oracle computer wants to get back to Proton, so it gives people ambiguous answers that incites them and sets events in motion to achieve the juxtaposition and eventual separation of frames.

Keeping true to the dual-identity nature of the series, even the Oracle has an analog stuck in the world of Proton: the Book of Magic, a hidden tome with countless spells that pretty much anyone can use.  Hey, a super powerful object that no one knows about until halfway through the last book!

Anyway, of course Stile gets it with very little hassle and Sheen ends up using it later during the final battle, becoming a sort of "Robot Adept."

Like Star Wars and Anakin Skywalker, we now must bring balance to the world.  In Phaze, they've been mining so much Protonite, that it has thrown the frames out of balance.  So to fix it, they've gathered this giant ball of Phazite (the analog to Protonite) on the Phaze side, and must roll it to a certain area where it can cross the curtain into Proton.  Doing this restores the balance, like moving weight from one side of a scale to another.

Of course, it's not that simple, because many Citizens and Adepts stand to lose power if balance is achieved.  So with the juxtaposition of the frames, we have fantasy creatures fighting robots and androids, and it's just a mishmash of all manner of strangeness.  The task of transporting the Phazite to the curtain takes up the last chapter of the book, which is 60 pages long.

It's basically a massive Tourney game for the fate of the two frames...an epic match of Phazite Ball!

Suffice it to say, they succeed in getting the ball to Proton...but only because of a very fortuitous reversal spell cast from the Book of Magic.  At the end, the goblins had taken over the ball and successfully rolled it away from the curtain, triumphant in their victory, without understanding that the reversal spell had switched the directions of the world!  North became south, east became west...and the wrong direction became the right.

And wouldn't you know it, once the frames are separated, Stile remains in Phaze, while Blue's soul occupies an android in Proton (I'm not even going to go into the storyline about the original Blue Adept's soul...I told you this book was complicated).  Stile gets to remain with his love, the Lady Blue, after all!

How is this possible, you ask?  By the very reversal spell that determined the match of Phazite Ball.  It sent Stile and Blue to the opposite worlds they were expecting, because it's like, a reversal spell.  Whether this sends everyone else to the wrong world is unknown for the novel ends right there.  Why only Stile and Blue?

Why ask why?  It's a Piers Anthony fantasy.