It's been just over a year since my last The Hope of Memory update, and I'm pleased to announce that Rom Tar is essentially finalized!  I need to create the trade paperback proof and do one more read through of that, but that's it.  I'm happy with how it's come together.

I've been working on it since September 2013, and it's great to finally check it as done.  This book was very hard to write, because it's like building a whole new world and society on top of the one we're already familiar with from The Distant and Wilders.  And with the jumping around in time that the series does, I had to spend a lot of extra time on the details, making sure all the proper world building was done before feeling comfortable releasing it.

After eight official drafts, Rom Tar comes in at 171K words, making it the longest of the trilogy.  That doesn't include the extra 20K of background notes I put together, nor the detailed list of named characters (257) in the trilogy, nor the huge spreadsheet of the complete timeline (that also details events before and after the trilogy for context) I had to make in order to stay sane.

In no way am I comparing this to popular epics of our time, like Wheel of Time and A Song of Ice and Fire, but I have a much greater appreciation now, after writing this trilogy, of what those authors have had to deal with in terms of world details and keeping track of characters and events, etc.  I thought it was hard for just three books.

Anyway, Rom Tar should be out about two months from now. 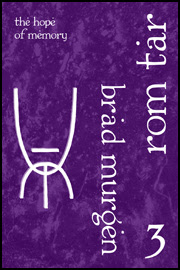 Part of why Rom Tar took so long to release, was that I took breaks here and there to write something else.  I have to do this occasionally, I can't focus on the same thing for such a long time without getting burned out.  It's best to step away and do something else for a while, then come back refreshed and ready to continue.

I've been writing a novel called Hop Limit, which is a standalone about the afterlife and the internet.  I'm at 138K words of what will probably end up being 180K total.  Much longer than I originally envisioned (wanted to stay under 100K), but with the way I write, sometimes the work takes on a life of its own, and I go where it leads me—which is always a better place.
Posted by Brad Murgen at 1:48 PM