Seven and a half years ago, I wrote a long post on the works of Anne Rice, primarily the books that involved her vampires and witches.  At the time, I thought it was the end of those stories, as Rice (for various reasons) had sworn off writing about Lestat and the vampires any further, and thus I felt safe writing a kind of a mini retrospective about her work that elucidates my displeasure with the ending.

Two years later, Rice decided to return to her vampires after all (shocker!), and wrote two new entries in the series: Prince Lestat (2014) and Prince Lestat and the Realms of Atlantis (2016).  I read them in late 2016 and decided I would do an update post with my thoughts on the new entries.  I meant to post this in 2018, but you know how it is.

In short... the Atlantis and alien stuff I mentioned in my previous blog post has now been shoved into the Vampire Chronicles.  We don't get the space vampires I wanted, but we do get something interesting.

And now it seems Rice has added yet another entry, Blood Communion: A Tale of Prince Lestat (2018), since my initial draft on this.  I haven't read it, but I will later this year, and will do a post on it.

Something you should know right off the bat—these books essentially take place after Memnoch the Devil (1995), in spirit washing away the last few chronological books (like Blackwood Farm (2002) and Blood Canticle (2003)).  Kind of like how Disney turned all of the Star Wars Expanded Universe into "Legends" and rendered all of it non-canon.  It's still there, but now as an "alternate universe."

I really did like the Quinn Blackwood character, though, so I missed him for sure, but I definitely did not miss anything from Blood Canticle.  That book was god-awful, and you can read why in my previous post.  I don't believe anything about the Mayfairs or that crossover nonsense was mentioned in these new Prince Lestat books.  If it was, it didn't make enough of an impression on me.  Plus, it's not that important to the story of these new novels.

Please note that this post may contain spoilers for all books in Anne Rice's vampires and witches series.  If you plan on reading all of them and don't want anything spoiled for you, stop reading now and come back when you've finished.  There will not be another warning. 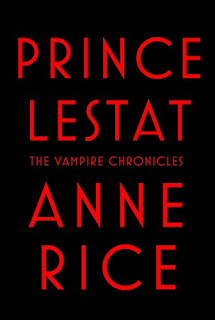 I have mixed feelings on these new entries.  Half of the content I liked, half I didn't.  I'm not as attached to the way Rice presented the vampire world in the first couple of books as some people are, and I was completely memoir-ed out, so it was nice to get new entries that were firmly rooted in today's modern, technological world.  I've always wanted Rice to explore vampires in the future rather than the past, and this scratched that itch somewhat.

But!  I also don't like Rice's crossover tendencies and in my opinion, if you're going to come up with some new race or thing, make it a separate thing.  Stop trying to shove it into an already established world to "add to the richness" or whatever nonsense.  Rice's efforts to further expand on the origin of the vampires introduces an entirely new race of alien beings and just makes everything even more messier than it already was.

So if you are a fan of the majority of the books (like me), I recommend them.  Just lower your expectations and be ready to do a lot of eye rolling.

Vampires in the Now

From the very beginning of Prince Lestat you are presented with the vampires we know and love and hate using the internet and devices like iPhones.  I was wondering why we hadn't seen much of that in the previous entries, and then I remembered that she "ended" the series in 2003.  The internet was not as pervasive then and the iPhone wouldn't be around for another four years.

I always wondered what vampires would do in the age of social media, always-on technology, always being watched, etc.  In Prince Lestat we have one starting an internet radio show for vampires, and everyone connecting together online.  Vampires no longer hide in the shadows and most of the vampires in existence are known.  Which basically kills the mystique of vampires and what attracted many people to these books in the first place.  When normal mortals know who they are and follow them around like paparazzi, snapping pics with their iPhones...then they're nothing but modern celebrities.  Which makes logical sense to me.

There's also a doctor-turned-vampire who delves more into the science behind vampirism.  Rice previously explained that it was caused by some parasite in the blood, an ancient spirit passed on to whoever was infected.  As we all know, killing the original host of that spirit kills all other vampires.  Maharet took over hosting at the end of The Queen of the Damned, when Akasha was killed.  This is an important element in the two novels covered here.

This book is all over the place, but the tl;dr is:


Perhaps you are wondering who Rhoshamandes is.  So was I.  This character was made a vampire by Akasha herself way back in the day, but first appears in this book.  I'm not a fan of introducing new ancient vampires at this point... surely we would have heard of him before?  What was he doing when all the stuff in The Queen of the Damned was going down?

There is also a minor plot line involving a new character named Fareed, a vampire doctor, who is studying the science behind vampirism and wants to extract Lestat's um, sperm, to um, enable him to um, procreate.  Never thought I'd type a sentence like that in my blogs.

...and the Realms of Atlantis

While I enjoyed the overall concept and story of Realms of Atlantis on its own merit, combining it with the vampire canon was completely unnecessary to me.  From earlier interviews, it sounded like Rice's Atlantis story was going to be its own thing, but for some reason she decided to shove it into the vampire world.

Anyway, if you ignore the vampire stuff entirely, it's actually an interesting story with some cool concepts.  Unfortunately, in trying to further explain where Amel comes from, Rice only creates more questions with the introduction of the human-like manufactured Replimoids and the Parents, bird-like alien beings from a planet called Bravenna.  I thought the existing explanation from The Queen of the Damned was more than sufficient.  Sometimes it's better to leave certain things unexplained.

But now that Lestat is the vampire host for Amel, we get the whole story straight from the spirit's mouth:


...you know what, never mind.  This book is really hard to summarize effectively, and you should have read it anyway, if you're reading this blog.  Or tried to read it, considering how many people seemed to have given up on it in disgust based on the Goodreads reviews I've seen.

At the end of day: Amel is eventually separated from Lestat and put into a Replimoid body and the vampires remain vampires without being tied to the spirit.  A perfect setup for more Lestat hijinks!

This time, instead of actually buying the physical books, I chose to listen to the audiobooks.  If you're wondering why I don't use many character names in this post, this is why.  I can't remember them, and I don't have a book that I can go back and check.  That's the only real drawback of listening to an audiobook... no easy way to skim back over the content to find that detail or recall a name.

Other than that, I really enjoyed listening to them as audiobooks (I don't have as much time to sit and read anymore, and they are great for long commutes).  It was a bit tougher for Prince Lestat than for Realms of Atlantis, because there are so many characters and many get their own long chapters.  Depending on when I took a break from the book, sometimes I'd forget what character POV I was on when I came back.

To wrap this all up, it appears the Vampire Chronicles are on their way to the small screen.  Rice regained the complete theatrical rights to the Chronicles in 2016, and with the addition of Bryan Fuller in Jan 2018, it seemed to be moving along towards actual production.  However, in late 2019, it was dropped by Hulu and is being shopped elsewhere.  And with the COVID-19 pandemic going on right now, I assume it's going to be a while until we see it actually materialize, if ever.

I'm excited to see a faithful adaption, despite expectations being high in a post-Game of Thrones world.  The series is being produced by Paramount Televsion, so we'll see how that turns out.  HBO set the bar with fantasy production values on television.  Can other channels manage the same thing?  (SyFy / Amazon Prime has done well with The Expanse, an adaptation of the science fiction series by James S.A. Corey, which I highly recommend—both the books and TV show.)

There's another book to read!  I've added Blood Communion: A Tale of Prince Lestat to my Audible list and will get to it soon.

Will there be even more vampire books from Anne Rice?  At this point, I'd say that's a certainty.  She's already gone back on her word so I expect that whenever she discovers a story featuring Lestat to be told, she'll tell it.  And if it gets traction on TV and becomes popular again... it's a sure thing.  Maybe she can bring Quinn Blackwood into this new continuity?

I'm clearly not a fan of everything she's done, but I'll still read it.  I can't help it.