Prince Lestat and the Blood Communion

So here we are, Blood Communion, another Vampire Chronicles novel.  I'm putting this down as Book 18 in my Vampires / Witches chronology, though to be honest, with some of the latter crossover novels being ignored (essentially rendered non-canon) by Anne Rice, it's probably not necessary anymore.  But given the way Atlantis was brought into the Chronicles, and that the Talamasca still exists, it's all a shared world to me.
Over/under on the Wolf Gift Chronicles crossing over into the shared Vampire universe?  I figure when she finally gets interested in doing another of those, Lestat will be in it.  Especially after what happens in this new entry.  It's fairly short, so my post will be too.
Please note that this post may contain spoilers for all books in Anne Rice's vampires and witches series.  If you plan on reading all of them and don't want anything spoiled for you, stop reading now and come back when you've finished.  There will not be another warning. 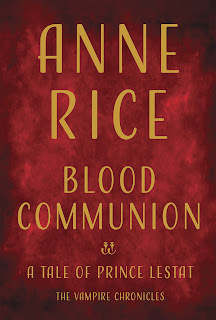 I guess the title of the novel is technically Blood Communion: A Tale of Prince Lestat, because we need "Lestat" in the title so people know it's a Vampire Chronicles novel that features Lestat, which must be the only series and character that fans of Anne Rice are interested in?
But if that's the case, why not call it Prince Lestat and the Blood Communion, following the same format of the previous entry, Realms of Atlantis?  It would feel more aligned with the previous two novels that way.  I don't understand titling or marketing sometimes...it's as if they always assume the audience is dumb or knows nothing about the existing franchise.  We're a dozen-plus novels into it here, I think those still following will get it.

Before I started this novel, I was thinking, "I hope Rice doesn't again introduce a new really old vampire we've never heard of, you would think at this point, after so many novels and near-catastrophic events, that all of the ancient vampires would be known."  I mean, waaaay back in the third entry, Queen of the Damned, all vampires were doomed... and lots of ancients didn't reveal themselves afterward.  In Prince Lestat, all vampires were threatened by Amel, the vampiric spirit... and even that didn't prompt all the ancient vampires to reveal themselves.
Which is why, of course, right at the beginning of Blood Communion we meet Fontayne, a vampire made by Pandora, one we've never heard of before.  Since Pandora made him back in the day, he's like, really old.  I was rolling my eyes until I heard the explanation for his absence, which was actually pretty clever on Rice's part.  He had angered Arjun, Pandora's controlling fledgling, and on pain of death vowed never to reveal himself...until Arjun was killed by Marius towards the beginning of this novel.
So I'll let this one slide.  However—he seemed kind of pointless because after his introduction the rest of the novel is about the Benedict blood communion and Rhoshamandes aftermath and Fontayne only makes brief appearances.
There's also a few more new ancients, like Baudwin and Gundesanth, the latter showing up towards the end.  They had been friends with Gregory in ancient Egyptian times.  There's a lot more Rice could explore there.  I've been generally tired of vampire memoirs—let's focus on the future, rather than the past—but if Rice were going to do one more, a Gundesanth one would probably be interesting.

I actually thought Rice was killing off Louis, Gabrielle, and Marius.  Louis alone would've shocked me but all three at once?  The whole sequence from the kidnappings to their rescue was really well done, especially the part where Lestat kills Rhosh.  That was just badass and is now one of my favorite scenes from the entire Chronicles.
Though I liked the whole sequence, I was a little disappointed that at least one of them didn't die, and it was very fortunate that Lestat was able to find them based off the few words Rhosh screamed before dying.  How cool it would have been had they really died, or been left in their iron coffins, heads twisted backwards, only to be found many, many years later in a future Chronicles novel?
Alas, Rice probably doesn't plan that far ahead and anymore.  These new Prince Lestat novels are more like the Indiana Jones fast-moving serial adventures than anything else.

I like the idea of Lestat essentially becoming one of the ancient ones that we've been reading about... over time they pass away (many ancients have died at this point) or give up on power, choosing a most unlikely ruler for the modern times.  Lestat has broken a lot of the vampire rules and he was chosen leader because of his selfless act of potentially sacrificing himself for all vampires when he gave himself up to Rhosh.
And because of that, all (most) of the vampires are now united in this modern, connected world.  The cults and splinter groups of vampires, like the Children of Satan, are all gone, and pretty much all of them know the history and how it all works.  Knowledge is power?
The rest of the book is kinda anticlimactic: long live Prince Lestat, he brings his village architect (forgot the name) into the Blood, and oh look Marius painted a cool mural of the whole gang, even the new (old) kids on the block like Fontayne.
But you know what... it actually works as a proper ending to the series, when you think of it.  The whole series is about Lestat anyway, and finally he's truly accepted by all the other vampires.
I doubt it will be the end, but if later books turn out to be another mess like the Mayfair crossover, you can just stop after this one and call it day and be satisfied.