I have been involved in many musical ventures over the years, and thought it was time to aggregate them all in one place.  I currently do not perform / write music, but perhaps someday I'll have free time to do so again.

Some material needs to be converted from different formats, but eventually anything listed here will be available on my YouTube channel.

Note: I am still updating information and content on this page. Yes, I know I'm lazy.

Feel free to post questions in the comments at the bottom of the page.  Any song with an "mp3" link is downloadable.  Enjoy.

I have extra copies of many of the items listed below.  The amount I have is detailed in each description and most are shrink-wrapped.  If you are interested in owning a physical copy of any of these works, please send me a message at vyrastas@gmail.com.

University of Nebraska-Lincoln Marching Band
I played snare in the drumline for 3 years, from 1995-1997.

Forthcoming content:
- Performance videos... have to convert from VHS

Lead
This was the first band I was in.  I played drums.  We formed in high school in Papillion, NE around 1993, and broke up around 2000 in Omaha, NE.  I formed it with my friend Matt Kucera, on bass.  Later, Scott Armstrong joined on guitar, but we didn't play a show until 1996, when Mike Dappen joined on vocals.  Eventually Karl Elliffe-Odum came on as a second guitarist.


We were a five-piece for about a year, did some demo stuff, some shows, but not much else.  Our initial musical style had been very basic death metal, but over time we started writing more complex material.  Eventually Matt and Scott were let go and we settled on the final lineup of Mike (bass/vocals), Karl (guitar/vocals) and myself (drums).


We recorded two EPs with the final lineup, in 1998 and 1999.  We played in many states and shared the stage with a lot of great metal acts.  The legendary death metal band Mortician played a show in the basement of our house in Omaha when the venue cancelled on us.  We became good friends with Origin from Topeka, KS, who are still around, releasing several albums on Relapse Records.  We even played the Milwaukee Metal Fest XIII in 1999, but we performed horribly (I was pretty nervous... it was a disaster).

In 2000 things weren't working out anymore, Mike was getting interested in other musical styles and I was losing interest as well.  So we broke up.  Mike went on to join The Faint on guitar, going by the stage name of Dapose. 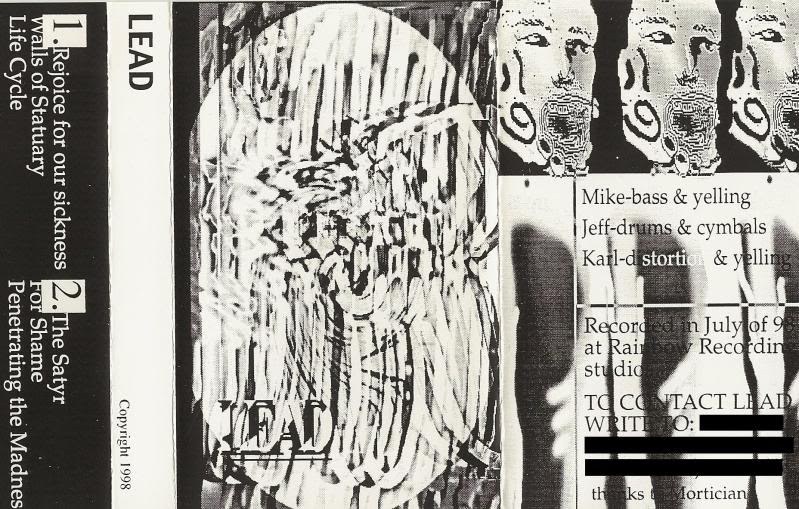 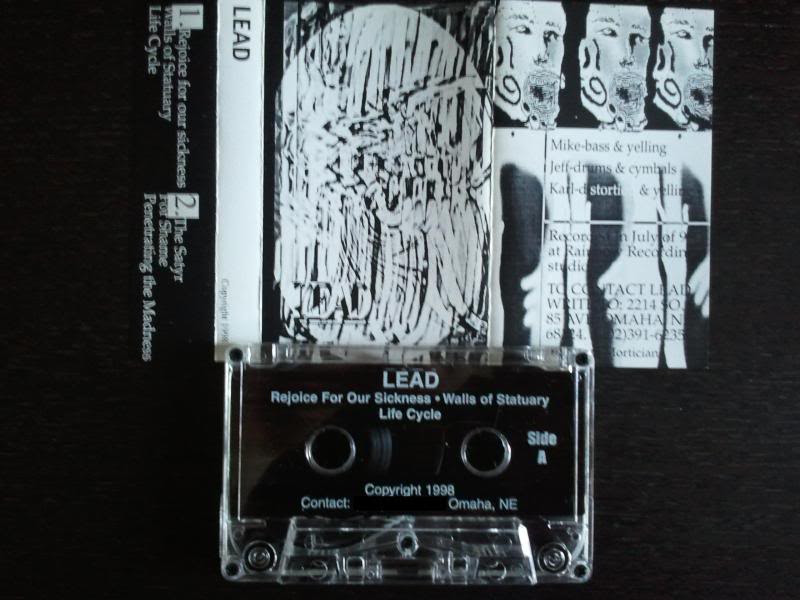 This demo was recorded at Rainbow Recording Studio in Omaha, NE on a single day, 7/18/1998 (about 7 hours total).  Since we didn't have much time for retakes, it's pretty rough and definitely sloppy in parts.  I ended up playing most of the guitar on "The Satyr" since Karl was having trouble getting a good take (it was a long and complicated).  We made about 300 cassettes of this.  I have 8 left... most were sold or traded to distros overseas. 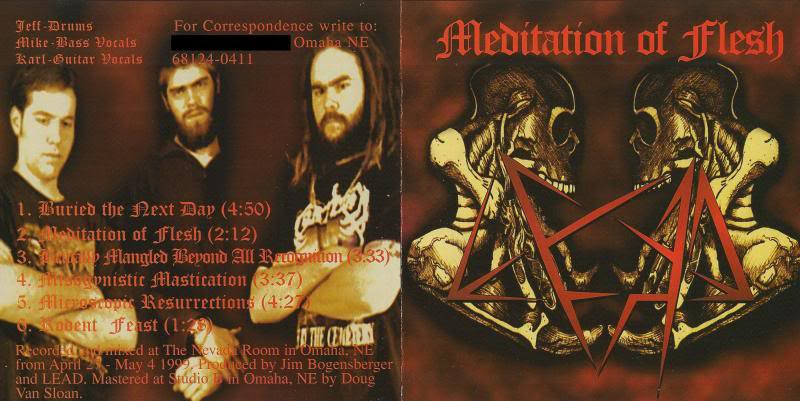 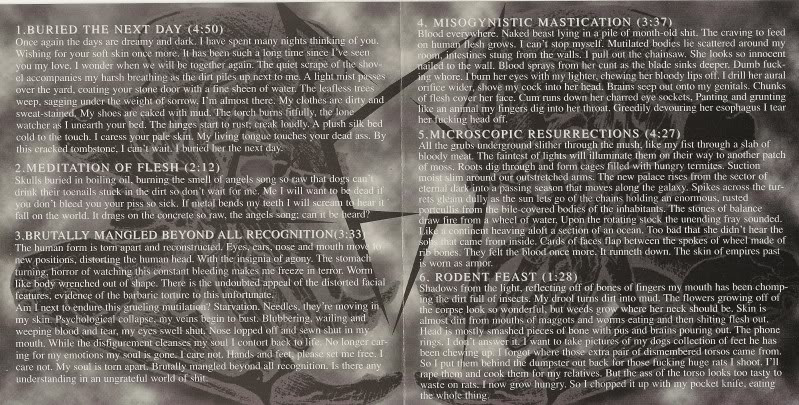 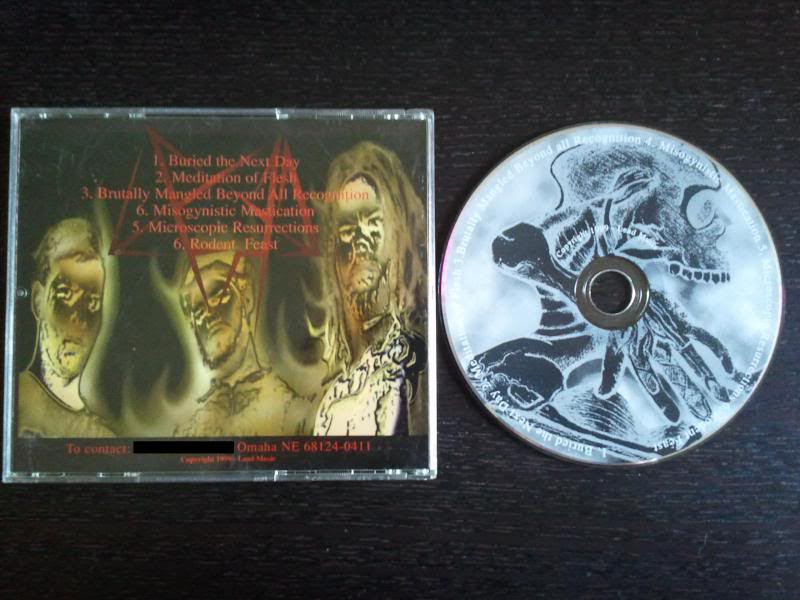 Compilations
Lead was featured on a few compilations.  For these, usually you paid to be added (usually $100 or so), you'd get a number of copies to distribute yourself, as would the other bands on the compilation.  So it was an easy way to get publicity through the underground (most of that was still done through snail mail at that time, not the internet).

Frozen Dawn V
Frozen Dawn Records produced a number of compilation CDs.  I don't remember how we got on this one, their 5th (Karl did most of the work behind these things), but it featured the first side of our 1998 cassette demo (3 songs).  I don't remember what we paid, but I think we got around 80-100 copies of this.  Funnily enough, I found listings on Amazon and eBay for this one, at $39 and $30, respectively, and that's not even new condition.  I still have 41 copies of this - shrink-wrapped!  Damn, maybe I should sell them online.  Here is one side of the insert:

Other bands featured on this include:
Skinless
Death of Millions
Khisanth
Disciples of Berkowitz
Fallen Empire


The Grimoire of Exalted Deeds - Legion of the Scroll #8
The Grimoire was a popular metal zine at the time.  We got on their 8th compilation by doing nothing more than paying $150.  I didn't feel like posting the insert since it's all scantily-clad women (my wife wouldn't appreciate that), with hardly any band info.  Here's a shot of the back, if you really want to see it.  It featured "Walls of Statuary" from our 1998 cassette demo.  I only have 1 extra copy of it.  I think we gave all the copies we had away for free because we were too embarrassed to actually charge anyone for them.

Milwaukee Metalfest XIII Compilation
As mentioned earlier, Lead played Milwaukee Metalfest XIII, one of the biggest metal "fests" at the time.  We paid something like $400 to get featured on the 2 CD compilation for the event, which they gave out to people for free (I think).  It featured "Rodent Feast" from our Meditation of Flesh EP.  I only have my one personal copy of this; we didn't get extras.  There are some copies floating around on eBay, if you're interested in seeing the specifics and the inserts.

Meditation of Flesh appears on many sites as just an album page, with no interesting info, so I didn't bother adding those links.  Note that there is another band called Lead from Japan, formed in 2002 and still active. That is a different band, obviously, and is the one listed on Wikipedia.

Unshadowed
I did a demo with another metal scene friend, Sean Baxter, in 2000, under the name Unshadowed.  It was Sean's brainchild, and he wrote four of the five songs on the demo, performing guitar and vocals.  I composed the last song, "Torn," along with all of the drums.  We did this at a basement studio of a friend of Sean's, on digital equipment.

In addition to drums, I also played some of the guitar and the bass on "Torn."  None of the other songs have a bass part recorded.

Songs will be posted on YouTube in due time.


Broken Hope
Sean knew the guitarist of Broken Hope, Brian Griffin, and had signed on with them to play bass on their upcoming European tour.  They needed a drummer and Sean asked me if I would do it.  Of course I said yes, already being familiar with Broken Hope's work.  I learned all the songs for the tour fairly quickly, and then toured Europe for around 3 weeks with them in early 2001.

After that, I relocated to Chicago, IL, in order to help with a new album.  Things eventually fell apart, I grew a little tired of drumming, everyone was kind of doing their own thing... so the band broke up.  I moved to northern Virginia later that year to be near the rest of my family.

Forthcoming Content:
- Video from the 2001 Masters of Murder European Tour, featuring:
Macabre, Die Apokalyptischen Reiter, Broken Hope and Severe Torture
- Demos of the songs we had been working on when the band broke up

While working in the next band (RWbF), I wrote some electronic music on my own, using a drum machine and mixer on my PC, along with a high-end Yamaha keyboard/sequener.  We used some of the same tools to create demos for RWbF so others in the band could learn the parts easier.

The electronica I dubbed Goblin Stands, after one of my cats, Goblin, who frequently stands on his hind legs.  I was just trying to see if I could write something interesting in that genre.  I wrote seven songs, performing riffs on keyboard, writing drum parts on a drum machine program, and piecing everything together in a program called DDClip.


The composing here is experimental in the fact that I just wrote it as I went along, without any real plan.  I also did not write down how things were played (i.e. notes, keyboard banks for each sound, etc), so honestly some of this I could not recreate without a lot of work.  I wanted it to be something that wasn't reworked and refined multiple times - just music as it initially came out, left on its own.

I mainly wrote this for my own enjoyment, though I did post it on a few mp3 sites, so you might be able to find it floating around somewhere in cyberspace.  If I were to get back into composing music, I'd do something like this again, where I can do everything myself and have complete control.

In Virginia, I started playing drums with my younger brother, Jon, and his friend Adam Williams somewhere around 2003.  It was more hardcore / emo / metalcore style of music, and we played in my parents' basement and various practice spaces, tooling around for a year or so.  Our early band name was Pawn Takes King and we wrote a lot of songs that had poorly recorded demos.
Eventually we added Matt McQuary on vocals and Alex Abrahamson on drums (alums from a local hardcore band called Chapter VIII), and I switched to guitar (Adam and I were writing most of the material, and I preferred guitar at this point).  At that point we changed the name to Raising Water by Fire (inspired by Neal Stephenson's Baroque Trilogy).


We played a number of shows in the northern VA and DC/MD areas from 2005-06. We also recorded some demos, detailed below. The band eventually broke up in early 2007.


Images from the first website I created for RWbF (an elemental theme, obviously):

Demo (2005)
I don't recall exactly when we recorded this, but it was done when Matt and Jon lived in Arlington, VA.  We recorded it through Matt's computer.  The songs here are very slow compared to how we eventually played them live and on our later EP.  I'm not including the version of Surgery here on YouTube or for download because the guitars were way out of tune and it sounds horrible.  We never did anything with these songs, aside from handing out a burned copy of them or posting them to MySpace. 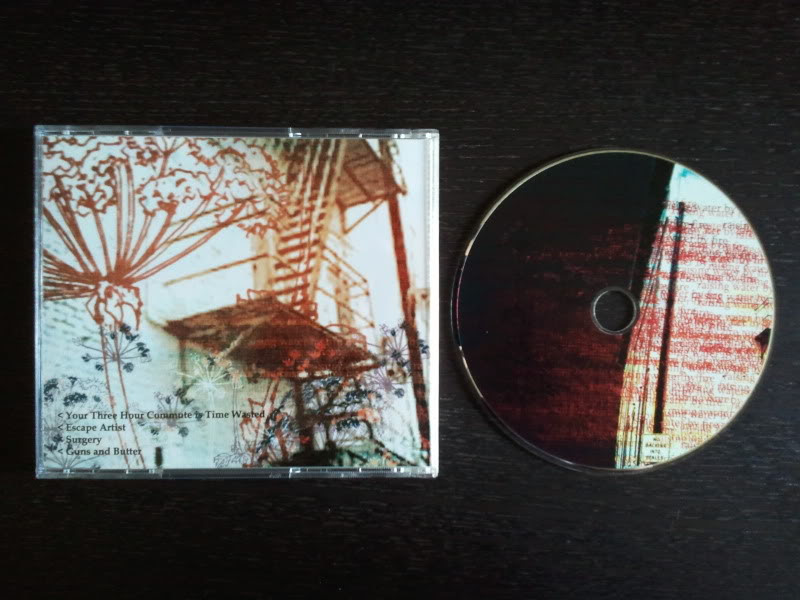 This was recorded during December 2005, at Nothing But Noise studios by Ben Mellott.  It took place over the span of a few days, I can't remember how many, exactly.  We made 1000 copies of this, but probably only sold/gave away 100 or so.  Some copies were trashed, the rest split amongst the band members.  I only have 27 copies left.

Demo Album (2007)
We had a number of other songs that we wrote in the latter half of 2006, and which we performed live.  We recorded 11 songs in early 2007, engineered by Matt.  This was never released in any form or fashion, and they are posted for posterity's sake.  The recording is not too bad given how we did it, and it's the only recording of the newer songs that we made.

Some parts of "Escape Artist" were changed from the EP version, and the acoustic bridge between that track and "Surgery" was dropped.